This story starts in the day last year when John drove Lysander the tractor. 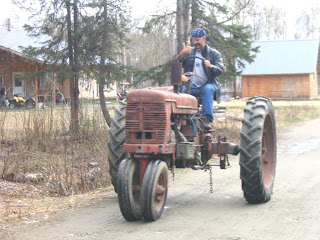 Everyone who has driven Lysander comes back with the same reaction: a delighted grin on their faces. If you tried him on a freeway, Lysander wouldn't do so well, but here in bush Alaska, he is a King. Anyway, after dinner that day John was doodling on the "tablecloth", sheets of paper that are used to wrap shipments or used by movers to pad objects in boxes. It is wonderful paper, it stimulates creativity. You don't care if you blow a drawing if the medium costs nothing. Anyway, after dinner John started doodling. Since he draws Star Wars characters at the drop of a hat, a sinister -- maybe-- figure emerged: 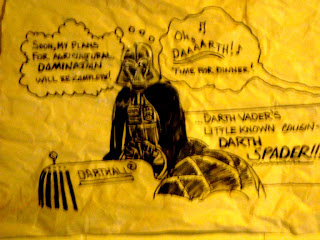 I must apologize for the awful colors in this pic, it is really black and white. I'm sure if I fiddled with the camera long enough I could find a better mode. And this is the birth of Darth Spader, Vader's little known agricultural cousin. "Soon, my plans for agricultural domination will be complete!" A classic line. Note that Darth drives a Darthall tractor; a close relative, one supposes, of the justly famous International Harvester Farmall line.

The next day, I was sitting at the table when John wandered down about midday. I happened to be wearing my pride and joy, a pair of Carhartt's overalls. So I said (and whence it came, I don't know) "Darth Spader wears Dathhartt overalls." Bingo. After John's coffee, the classic commercial appeared: 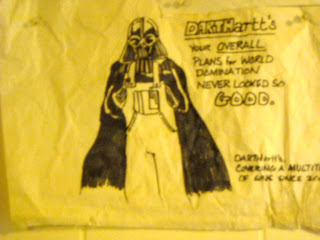 As you may be able to read, Darthartt's coveralls cover a multitude of sins; they are now Darth's trademark (or should I say IconMark?) Never mind.

Darth has become an Icon of Chalupy. You still have to meet the rest of the characters: Obi-Farm Kenobi, and the three pigs: Ham Solo, Leia Organic, and Luke Stywalker. But that, of course, is grist for another mill, er, post.
Posted by JRC at 7:37 PM
Labels: DarthSpader, Icon, tractor.