When I embarked on duck carving, I was aware that by and large, my tools were too big. Trying to carve a duck's bill with the tip of a Frost knife (wonderful tool, don't want to slander it, but it is too large for a 2mm duck bill). was very difficult. Providentially, I read an article in the Backwoodsman magazine, and I am at the moment too lazy to go thumb through back issues to give you the exact citation. The author forges his own tools with a propane torch, and uses Sawz-all blades as raw material. (N.B. a sawz-all is a reciprocating hand-held saw, beloved in the USA by the construction industry, and by me for the same purpose.)

After some hemming, hawing, and very bad expressions in four or five languages, I got my act together. Basically you need a propane torch, available at any hardware store or Wal-Mart, something to act as an anvil, and a light hammer: 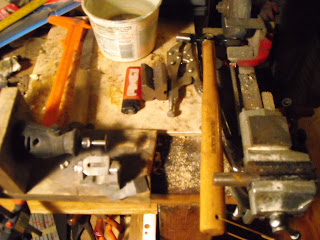 Let's see. Along the top, a US$ 1.00 vernier calipers, useful for rough and ready measurement; a plastic tub (ex-butter substitute) with tap water, a lighter for the propane torch, and a hand-operated grindstone. The Warrenton pattern hammer is a gem; got it from Grizzly Industrial for a few bucks. At the bottom of the picture, a Dremel-type moto-tool (Taiwan knockoff for about US$ 12, cutoff wheel mounted) in a homemade stand, and finally my 2.5 inch ( about 60mm) bench vise and in it, clamped, a piece of bar which is the "horn" of the anvil. Observe the flat conveniently built into the vise. Not visible is the propane torch, just aft of the anvil, mounted as close to the vise as I can get it. The little vise-grip pliers in the middle are my substitute for tongs.

When I started this business I was big on hook tools: 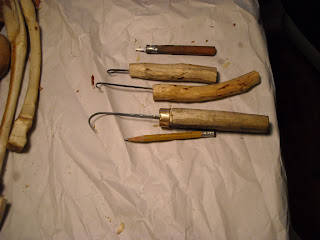 But I anve since evolved, and made gouges, carving knives, chisels, reamers, and, as they say "etcetera". However, note the knife at the top of the picture. It is a small chip carving knife. I love chip carving, a pleasant recreation. I have a commercial chip carving knife of German make, I can do 6mm chips with it. With the little guy I can do 2mm chips.

Once you have made the tool (more about that later) you have to make a handle for it. I use branchwoood whittled to shape, and cartridge brass for ferrules. I collect shotgun shells, rifle shells, pistol shells, you name it; nobody in Alaska heeds the admonition (drummed into me in the US Air Force) pick up your *#$ * brass! after target practice. So much the better for me. I cut the base off with a cutoff wheel on the moto-tool. Then force it on, whittle a bit, and eventually you have a ferrule. I find .45 ACP to be most useful, but .223 (5.56 mm NATO) is a close second. 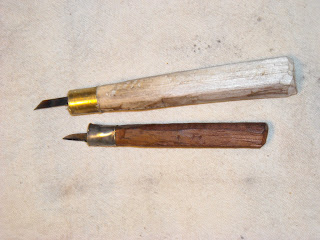 Above, a marking knife and my chip-carving knife. Eventually I plan to do a tutorial on the subject. It is very liberating. Need a tool? Make it.