I have all these projects that can't be shown. Expect a deluge after Christmas. I'll space them out. Meanwhile, with the house I got a wooden box with a partially carved lid. Inside were a bunch of cheapish carving tools. Now, sometimes these asiatic wonders are actually good steel; it is all roulette. But I paid nothing for them, so will they take an edge? 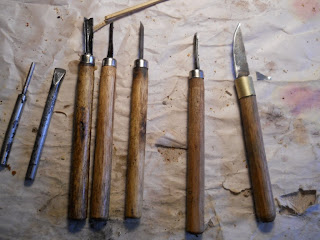 Yes, they will. Left to right, two tools from the microforge and Taig lathe -- more later. The third tool is microforged, from an oddly shaped thing in the box. It is now a V-gouge. It was quite difficult to make; getting a V shape into metal is not trivial. Furthermore, little pieces like Number three have no heat capacity. You get, as in baseball, three strikes and then you have to reheat. But eventually I did it. Further and furthermore, a propane torch will not get metal up to yellow heat, which all my books say you should do. I have to make do with "boiled carrot" -- bright orange. I may just try MAPP gas, although it is relatively expensive.

Anyway, all Numbers 4, 5, and 6 from the left needed was a good sharpening. I do this early in the morning, while I am still half asleep. That way it is soothing, rather than tedious.

On the far right is a knife made by Averky (there is a post, somewhere in here, about this episode). Taking advantage of a tool handle without a tool, I put a handle on it and le voilá, as the French say. I also did the edge for him. To his credit, he did a lot of the work. I think we tempered too hard. In the winter, I don't usually get kids. Too bad, in a way.

And so we come to the microforged tools. Both are made from a someone's junked screwdriver. I cut it in half and made a cold chisel out of one half and a pin punch out of the other. The cold chisel was forged; the pin punch I turned down on the Taig lathe, with some trouble because the piece was whippy. I couldn't do the job between centers because it was too short. I am only sorry I didn't take pictures, but I was much too absorbed to grab the camera, which was one meter away from the work. When you make tools out of scrap steel, you should make sure the steel is hardenable. Heat up to boiled carrot red, plunge in cold water (quench). If a file will skitter off it, it's hardenable. If the file cuts it, it's mild steel, no good for tools.

Making one's own tools is very, very satisfying. All you need is a scrap heap. Unfortunately the modern enviro craze has led to the demise of the good old junkyard. Too bad. However, plenty of people cast off perfectly good pieces of brass, copper and steel. You can make many a tool out of old valve springs, for example. Brass is harder to find lying about. I need a nice piece of 5 mm brass, about 26 mm long. Hmmmm....
Posted by JRC at 6:02 PM
Labels: homemade tools, microforge, sharpening