A Tableau in Progress

Looking through my labels, I see no entry under tableau. Most disconcerting. The closest is "miniatures". Now tableau is a French word, it can mean, for example, "blackboard" or "table", as in a spreadsheet. Dreaded words from the French Teacher in a Venezuelan bachillerato (high school): "Monsieur Rivero, au tableau!" Meaning I had to go up to the blackboard and perform. However, it can also mean a small-scale display, sort of a "diorama" so beloved by museums. I have posted on two of my tableaux (French plural used) before. But this is a work in progress and I am posting on it now, so you can see how it grows. This is the Crafts Tableau. 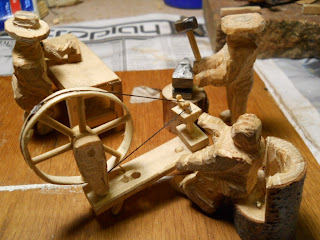 This is a tableau that is meant to represent various crafts. Going clockwise from right, we have Woodworker. He will eventually be planing a board on his brand-new workbench. The workbench was one of this week's project. It is made out of fireworks. Yes, fireworks. This fourth of July, the locals set off a vast amount of fireworks, which I abhor; they left the detritus scattered about. There were some very nice 6mm square pieces of wood left over and I took them. They made a nice frame. The top is birch, I must have cut it on the bandsaw because it is a couple mm thick. Much more work to be done; he needs some tools and especially a real plane.

Then comes Smith. His anvil is the sharp piece of an Alaska railroad spike, used to fasten track to sleepers (or ties). Hammer made from a piece of rod filed hexagonal. This was a lot of filing! If you want to work metal, you must learn to file. Eventually he will get tongs (to hold his work) and some work to pound on.

Finally we have Weaver. She is posed at the spinning wheel, because her loom is a major project all by itself. But no matter, the spinning wheel is awfully nice if I do say so myself. It was very difficult; I thought I could make it work, but alas, the scale is too small. I can't get the small axle to spin. The wheel was difficult, and here it is under construction: 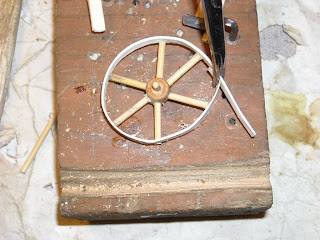 The rim is a piece of alder which I steamed; humb is birch, and the spokes are one of my favorite materials, 3mm barbecue skewers from the grocery store.

This week I made the blade for the plane which Woodworker will use to plane his board. It was once a nail. It actually shaves wood. Amazing.

You may also see that Smith's hat is missing a top. Wood does not always accomodate art. We'll deal with that later.
Posted by JRC at 6:48 PM
Labels: miniatures, tableau