The annual momentous village event, the Beryozova School Graduation, took place on May 12. The graduation followed the traditional pattern, with speeches, promotions, awards, and a play. Our students range from the very small... 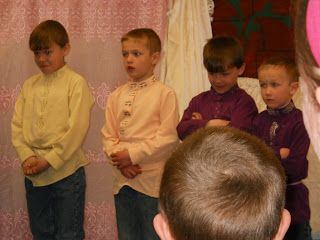 to the somewhat larger... 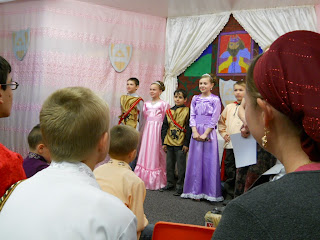 ...to the almost grownup: 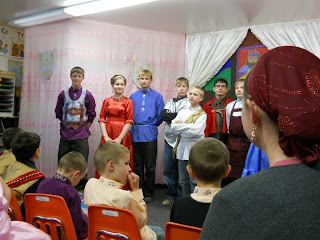 These kids are all reading above their grade levels, are advanced in math, and in general are a credit to both their parents and the three ladies who staff the school. The young lady in the red dress is Lukia. She came to my house long ago now, a child, and at that time I was impressed by her faultless manners. This year she participated in the Russian language Olympiada, a nationwide contest of Russian Language reading and writing, won a Gold Medal in the essay category, and will probably be published soon. Not bad for the Alaska bush. The young man in the black shirt towards the right, Ivan, walked off with so many awards that his parents should consider bringing a wheelbarrow to graduation! His sister did just as well.

Academics out of the way, we proceeded to the play. which (in my opinion) was the best they have ever done. This time they did it in English, which is nice for me because my command of Russian is less than Tarzan's idea of English. (I can read cyrillic -- but I have no idea what most of the words mean). Anyway the play concerned four Princesses, a King (daddy), some suitors, and a mystery: how did the princesses wear out one pair of shoes per day? Here, for instance, we see the Princesses, the King, and an unsuccessful suitor at left. 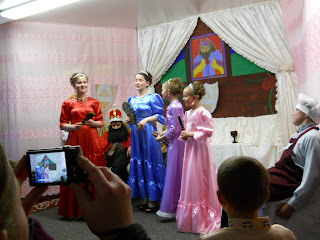 Alas, this suitor (the baker) fell asleep and couldn't solve the mystery. No princess for the baker. Eventually a knight in shining armor showed up. Being a soldier, he knew better than to fall asleep on watch. 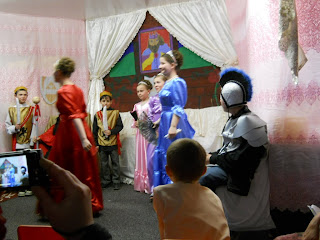 Observe the guards at left, ready to defend the King. At right, the knight. He solved the central problem: the Princesses were traipsing off to an enchanted castle in the woods, and dancing the night away. Their shoes weren't up to this gig, so they wore out. With the secret out, the princesses danced some more for us. 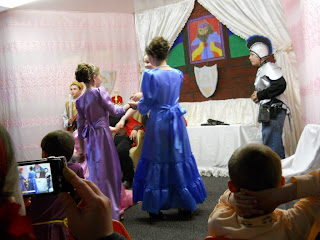 And so the Knight won one of the princesses, the King was enlightened, and they all lived happily ever after (to coin a phrase).

And after, the Village mothers served up the traditional Russian food -- marvellous. A good time was had by all,

And now that it's summer I expect the Russian kids to show up at Chalupy Acres for more education. I show them how to make things with their own hands. I think this is a valuable bit of their education, even if it is somewhat erratic, since I don't control when they show up.
Posted by JRC at 7:07 PM
Labels: school graduation, village