My old greenhouse collapsed this winter. I expected it. So it was time to build a new one. And so begins the saga of GH2.0, as I call it. My original idea was to use trees bent by nature into hoops. But a local survey defeated that idea. The trees are just too irregular. So, plan B. Inspired by Bruyere's Creative Country Construction, maybe we can get the hoophouse effect by bending saplings into an arch. Halfway. Let us try it. After some looking at the ground, I decided 3x4 meters was within reason. Actually I had my fingers crossed, and they still are. Very uncomfortable, but better than offending the Greenhouse Gods. Me? Superstitious? Never.

So I fired up Manfred the tiller and tilled the construction area. 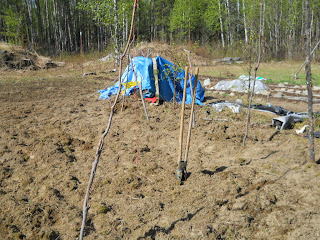 Then we dug holes, one every meter on bothe sides, with my trusty clamshell digger, shown front and center. I went down over half a meter, the deeper the better. You can see some poles shoved into the holes. This is to guide me and put the holes in about the right place, although this is not precision engineering. When I firt tried this in May, the ground was frozen 30cm down; I had to wait till it unfroze.

I wanted to use spruce for this construction, so I started collecting spruce trees. All done by hand. Note the new axe in the middle, a real joy. Now obviously the butt is much too thick to bend. But maybe the top could be bent. If I reduced the cross-section with FireAxe. But Not so much. A knot in a critical place. I then pursued a double course. I took the candidate spruces to the lake and dunked them. 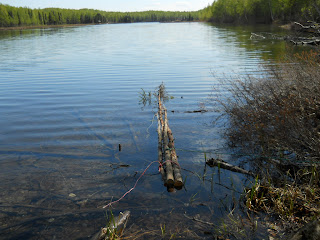 They are still there. In the meantime, I thought, "Hey! I live in Willow, Alaska. Why not try willow? So I raided the coppices, the most time-consuming task in the whole operation -- except for digging the blasted holes. And what do you know... 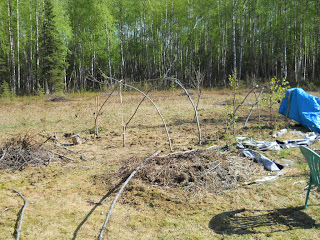 ... it bent! In case the willow dodge didn't work, I only cut a few saplings, so back to the coppices we went. I try, of course, to get each branch out of a different place -- clear-cutting is evil and anyway futile, because you need something like 3 meter long branches. The bends at the front are lilac prunings from my over-agressive lilac tree. Too short, actually, but they will do till next year.

Now we have to bend the willow. Easy. Bending two at once? Very difficult. I only have two hands. After some trial and lots of error, I evolved a procedure. Put the willow into the hole. Wedge it with a rock. Tie a rope to the top of the branch. Put the other willow into the opposed hole. 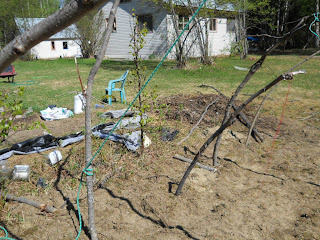 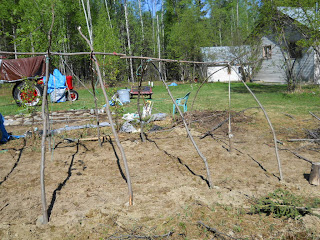 A little rustic. Not quite plumb but we have a frame, Houston. Needs trimming. Worry about that later.

I use greenhouses as Eliot Coleman does -- plant straight into the soil under the greenhouse. I do not use them to start seeds. This is a job for my windowsills. After a few years of this duty, the greenhouse soil is worn out. The soil needs wind and rain, snow and air. So I will build another one right next to it. Rotate. Not as elegant as Eliot Coleman's railroad system, derived by the way from 19th Century English glass-houses, but it should work. Stay tuned for the next episode.
Posted by JRC at 6:06 PM
Labels: agriculture, greenhouse