When in doubt, go fish.

Last Sunday, I was at a loose end. So many things to do, such a short summer! In these circumstances there is only one thing to do: go fish. So on go the chest-high waders (they do leak, but they were cheap at a thrift store), and the overboots that go with them, put on the vest that holds all (well, most) of my flies, pluck the small fly rod off the rack, and set out in search of the wily trout in Little Lonely Lake. Sunday is not a good day to fish, because the entire population of Alaska is there with you. As usual in such occasions I did not overhaul my fly boxes. I regret it. I am not the world's most expert fly fisherman but I really, really love it. Most people in Alaska go salmon-fishing; but I hate crowded waters -- although I really, really, and really love fresh-caught salmon -- and on Sunday Willow creek is playing to capacity audience, if not SRO. So trout it is.

When I got there there was a couple there already. They were spin-casting, that is using spinning reels. From the distance they were casting, I suspected heavy weights and probably bait. They were shore-casting. Can't do that with a fly rod. The fly weighs very little. The leader weighs even less. This is why we put on the waders. We need room for the backcast. The Alaskan lakes are solid trees to the waterline. So you have to wade out to fly-cast. Fly casting is like cracking a whip. The whip goes out behind you. This is the backcast. Then you snap forward. Out goes fly, leader, and the realtively heavy line. If you did it right the whole thing lands where you want it. If you didn't you have an awful mess. If you are too close to the shore, you catch a tree, not a trout. In a wind -- and Sunday was windy -- it becomes very difficult, at least for a non-expert like myself. And that brings us to the burning question: what is on the trout menu that say? British and American authors have published whole books, not to say whole libraries, on the subject. But this is Alaska, not a British chalk stream (no Alaska trout has ever graduated from Oxford or Cambridge) or a New York Beaverkill stream (there are no known instances of trout graduating from Harvard). They never heard of mayfly hatches. So, for once, book learning is not much use. In practice I start trying different colors. Sunday was a yellow day. Any fly with yellow in it won the day. 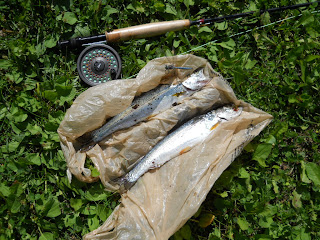 So I might have caught more. Legal limit is four in possesion. But two was plenty for me. I had enough to eat. Ratty (in Wind in the Willows) says that there is nothing -- nothing like messing about in boats. I agree with Ratty, but will add that eating fresh-caught trout is just as good, if not better. Try the trout meuniere and you will see.

It is no doubt mean-spirited but the spin-casters (very nice people by the way) caught nothing, up to the time when I left. A spinning reel will cast a weight to an enormous distance. Far longer than I can do with a fly rod, and requires no backcast, so it won't catch any trees. Mazel tov. But will the trout be interested in what you cast out to one hundred meters? For the record, I was once a spin-caster. But no longer. If you do fly-fish, remember to remove the barb on the hook. This allows you to release the catch if he (or she) is too small. I consider barbed hooks erm, barbarous.
Posted by JRC at 7:36 PM
Labels: fishing