The dreaded season, called "spring" in the lower 48 states has arrived. If not with a bang, then with a rumble. The rumble is caused by snow sliding off the roof. Our first hint was March 29. The snow came off the shop with a roar, I suppose. I didn't hear it, the house is surprisingly soundproof. 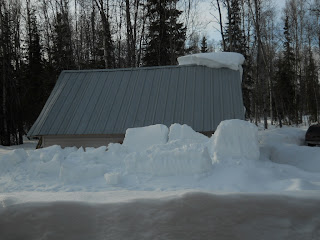 Note that the blocks of snow are piled level with the roof. This, of course, is why in Alaska we call it breakup. We look forward to it and dread it at the same time. The house roof is clear (but not the back porch, it is very gently sloped, nor the ridge on the roof). As I typed this there was yet another roar. I suspect we have lost some ridge snow. We have had a record snowfall, total 1.8m say. It has compacted, so there is less than that on the ground. How long will it take this stuff to melt? Can't say. Never had so much snow, almost 100% over previous norms. It will be "interesting," remembering the Chinese curse: "may you live in interesting times."

Yesterday's ski run convinced me that skiing is over. Snow awful for skiing, either hard ice or slush, and it all happened very quickly.

And today I went snowshoing instead of skiing. In places I went in over my knee. Especially under the spruces. I suppose that since spruce is an evergreen, the snow next to a spruce is not as dense -- leaves turn aside some sow. Maybe. All hypothesis. Anyway, here's to breakup!
Posted by JRC at 6:57 PM