The making of a mortise

Now we come to the point -- or is it the edge? of making mortise and tenon joints for timber-framing. We need to make a mortise. I hauled in a salvaged "4x4," a misnomer if ever there was one; 4x4" would be about 100+ mm and what you get, in fact, is about 90mm. Somewhere they have cheated you out of a whole centimeter. But let that pass; I am too tired to rant. You will recall, I hope, that a mortise is nothing but a trench in wood. Into this trench fits a tongue called a tenon. M&T joints were the standard practice in framing a house up to about the 1900s; after that nailing became the practice and collapsing houses the norm. Let's not go there, it's a rant. Instead let me show you how to cut a mortise. We begin by laying out the mortise. If I were making a mortise centered on the 4x4 I would use my new marking gauge. 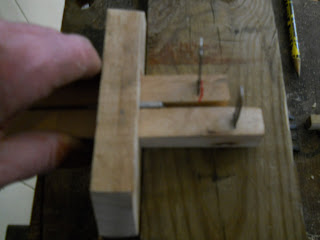 Note how the wide Japanese style gauge rides over the irregularities in the wood. I have it set up to cut right in the middle of the timber. Also note the knives in the gauge cut the wood rather than scoring it. However, I am practicing brace mortises. These are mortises for diagonal pieces of wood that support corners, keeping them at right angles. So I have to mark out in a different way. So I used a commercial marking gauge, because it is easier to set than my version of a Japanese gauge. But it has a needle point, so it scores rather than cuts. We are, by the way, making 25mm/1" mortises. Since the needles score the wood, we now chisel the edge of the mortise to prevent tear-out in the next step. 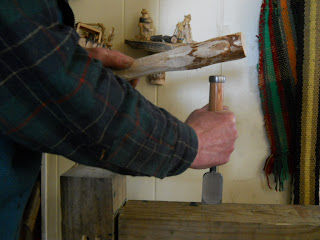 So we have prevented the edge from tearing out, because the next step will be to drill out the major portion of the mortise. 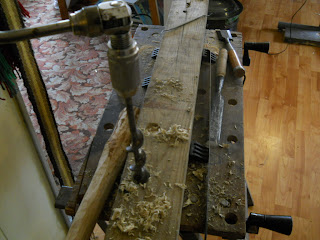 We are using a brace and bit for this job. A boring machine would be much faster. Unfortunately they are no longer made, and I have not found one. Fortunately it is not too deep a hole, 6cm exactly. A mark on the drill bit is my depth stop. You have to be quite careful where you drill the holes. They should overlap. This means less cleanout work at the end. So when you are through it looks something like this. 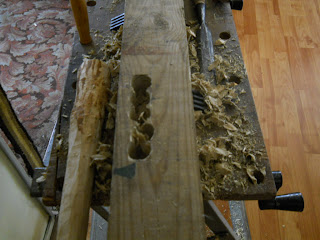 Somehow I am a little off on the hole next to the bottom. This is why this is a practice piece. We learn from mistakes. I think I mistook a crack in the wood for the centerline! Now we clean (square up) the mortise with chisels. 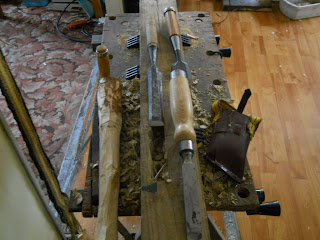 For this I use three (actually four, Mr Ferret is not shown) chisels. Foreground a 19mm Sorby UK mortising chisel, a 1" gringo chisel, and a wide (38mm) Japanese chisel. Be nice to have a 25mm Sorby chisel, but I don't so I use what I have. I am partway through cleanup when the photo was taken. At the end of the day, we have a nice 12 mm x 25mm x 60 mm hole in the 4x4, ready for the tenon. 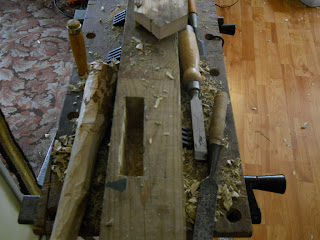 My mistake in the hole-drilling does not show up too badly. Now it is ready for the tenon. I haven't show you how to make the tenon. Do that later. But here is the trial fit. 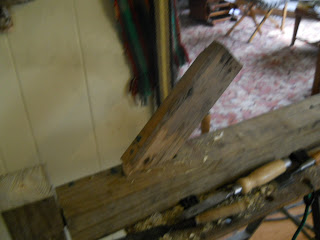 Not quite right. Reason is that the bottom of the mortise is not properly clean. When I dug it out with a ferret it worked very nicely. I'll show you the ferret sometime. It is a hooked tool used for carving, and works like a charm for mortise bottoms.

So I am piling up an impressive assortment of marking gauges! Here's my indooor inventory: 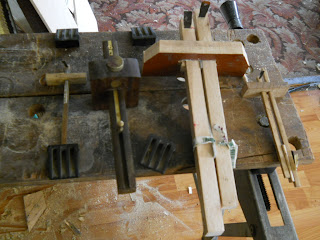 The outboard gauges are miniatures, but they work quite well for the big stuff. The left inboard one is commercial, and you have met Mr Japanese before. I find it very convenient to have several, because it bypasses setting these things, so I can have a gauge set up for each kind of joint.