The gardening season in Alaska is extremely short. End of May to somewhere in September. When the lower 48 is planting, we have snow on the ground. But there is a compensating factor. We have an enormous amount of sunlight. When it's dark in say, Iowa, we can still get around at midnight without a flashlight. So what we do is plant stuff that grows very, very, quickly. This year we planted (for instance) turnips from transplants. My daughter did the actual transplanting. She gets the Golden Turnip Medal.

Day before yesterday I was about my usual chore, weeding. If your plants can grow so can the weeds, so the chore is never-ending. Anyway I pulled off some weeds and beheld a turnip above ground! Large. I pulled it out and took it inside. 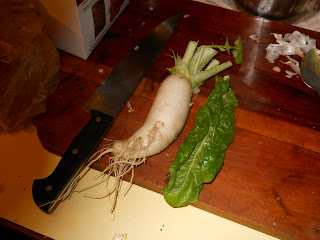 The knife blade in the picture is 25cm long, for a scale. With it is some Swiss Chard. Good stuff. Note to self: plant much more chard next year. Nice turnip, very tasty chard. Now today I completed some more weeding and found a lot more turnips. 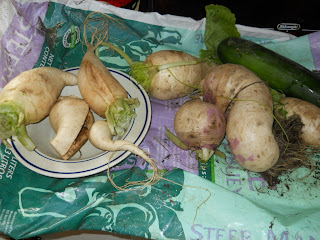 I also watered the greenhouse. I have two small (and green) tomatoes. But I also found the largest zucchini I have ever grown. It is visible at the right of the picture. A monster. I have a lot of radishes, too, but I didn't pull any up today. Amazing. Chard and radishes can be seeded. Plant in May, ready in July! Cheers for chard and radishes.

On the debit side of the ledger, cabbage, cauliflower and broccoli seem slow-pokey this year. We shall hope, and make a few sacrifices to the Garden Gods. I am sure my neighbors would be highly offended if I suggested one of their goats might be a suitable sacrifice! Maybe I'll burn garbage instead. Two goals witn one burn.Got to get rid of garbage, after all.
Posted by JRC at 6:25 PM
Labels: agriculture, conuco 2.0, garden