Once again, a plane-making chapter in this series. The ultimate object, of course, is to make picture frames in 14th century style. To make a frame you make a molding. Once you have the molding it is not so hard to make a frame. But to make the molding  you need molding planes, i.e shaped planes. After some experimentation I decided to make a plow plane. See the YouTube video I cited a good while back (Florentine 14th Century Frames). It is used to make the stair-steps (rabbets or rebates) that are later smoothed out to make the molding.

Of course, nowadays everyone uses power routers. But not me. In the old days it was all planes, and that is where I'm going. Onward!

Construction of a plow plane begins with the body. This is a priceless piece of oak, 145mm x 40mm x 22mm. It was once my daughter's dining room table, and the 22 mm is the thickness of the wood -- no doubt something in RGU, the Henry III units beloved by the USA. But oak does not grow in Alaska. I can live with 22 mm.  The first thing is to make the body. 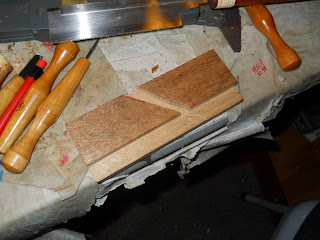 I have constructed an oddly-shaped mortise and a plain old rebate, or rabbet, in the block of wood. The oddly shaped mortise slopes at 45 degrees and 60 degrees respectively. The 60 deg is arbitrary. It will acommodate the wedge. The 45 deg. is the bedding angle for the plane. Wedged planes are ancient. But they are very effective. Not quite as convenient as a screw adjustment. And why the rabbet? Well, the plow is a skated plane. The plane rides on a skate, or piece of steel. I have temporarily attached the skate to the rabbet in the body. 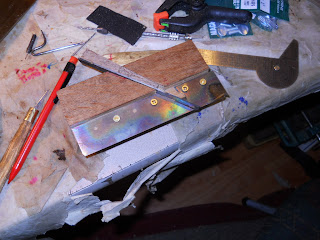 The skate itself is made of a piece of steel from a worn-out  Japanese saw. I had to anneal it to drill the holes for attachment. Hence the lovely colors in the skate. No art, just necessity. The skate is two-piece. The leftmost provides support for the blade. It takes a bit of fussing and fiddling here to get the proper clearances for the front part of the skate. You want maybe 3mm clearance in front; have to allow cuttings to escape. When you have fussed and fiddled, you can attach the skate permanently. 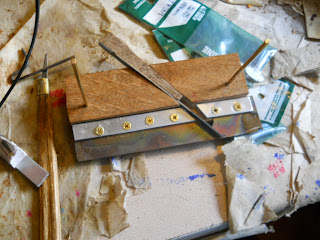 I have used an aluminum strip here, because I couldn't find brass of the proper thickness in Alaska. Note the brass rods sticking out of the side. They are for the fence. I'll do the fence later. The rods are in the wrong place, by the way. I had to move them later. That is not where they go! The rods themselves are welding rod 3mm thick. May be too flimsy. We shall see.

Next, we grind the cutter. I have gone into cutters before. I cut this one to shape on Gadget 1, see my last post. I had the good sense to make one of out of cardboard before I cut metal. It is shaped somehat like the letter L with a very thick horizontal. Final shape of the blade is obtained by grinding.  I did the bulk of it with a DTT (Dremel-type tool). The cutter itself is a piece of old circular saw blade. Then we use a wet grinder to put a preliminary edge on the thing. I have no picture of this, because in the middle of battle one often forgets to take pictures! No war correspondents here. 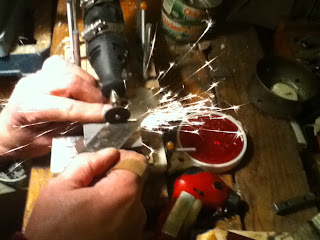 The next step is to add a fence.  The fence is a piece of wood that causes the plow to go at a fixed distance from the edge of your molding. It is attached to the brass rods I mentioned before (now relocated), with a pair of thumbscrews to keep the fence from creeping away and ruining your molding. 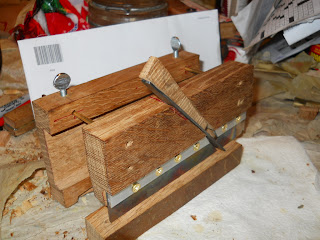 There is a lot of work still to be done, of course. I have to grind the cutter to its final shape, file the groove in the cutter that makes it ride on the skate, really sharpen the blade (see my thread on sharpening); in fact lots and lots of details and tuning. The piece of wood at the bottom of the picture is a stand-in for a molding blank. You can see that the plane will cut a groove in the blank. This is what we want, after all.

You can find plow planes in antique stores, at exorbitant prices. They are also made in Asia, not so exorbitantly priced. You can plunk down a great deal of money and buy the beautiful Veritas plow plane (search on plow plane). I refuse. It is much more fun to make my own. I remind you of George Dyson's (q.g.) saying, "never buy anything you can make, and never buy anything you can find."