I got tired of cutting clock wheeels and badly needed a vactaion sooo....

One of the first projects the beginning "model Engineer" does is an oscillating engine. These are very simple engines, where the cylinder oscillates back and forth to expose the intake and exhaust ports. A complete video of a build of an "Ossie" (as these things are called) engine will be found on Emma Ritson's channel on YouTube, if you want  to see a blow-by-blow description.

What had been holding me up was the lack of suitable material to build the cylinder.  But I found, still at Chalupy (which has probably burned to the ground by now, there is  huge forest fire there) an expended .444 Marlin cartridge  case. This is cylindrical, no necking at all, so it seemed like a possible candidate. A test with calipers yields 10.47 mm and the drawings call for 10mm. Close enough. In this build I have followed Mr Stan Bray's book, "Simple Steam Engines" and I must say both the words and the music (drawings and instructions) leave something to be desired.

Anyway, while I was at it I built a finger plate. This is a gadget to hold things down while you drill or otherwise machine them. It is a piece of aluminum with holes drilled in them. I got the idea from Clickspring's Channel on YouTube. It has a 45 deg  groove in it, which I did by tilting the block 45 deg in the vise and using an end mill. 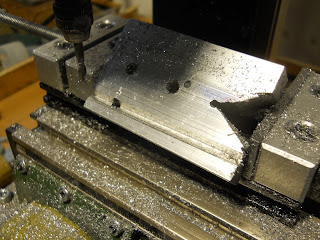 So, a bit of Aluminum later, we have a finger block. 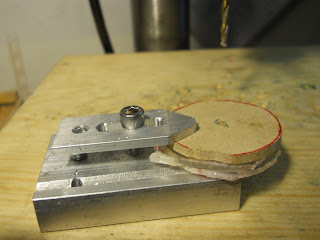 Next thing to so is to mark put the port face, which will be soldered to the cylinder. [In retrospect, I should have not done this. I should have bored out the cylinder and made the piston fit it. I also should have drilled the pivot, but not the port hole. I plead just following directions in the book.]
You see the finger plate in action. 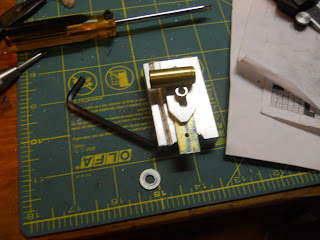 So next we solder the cylinder to the port block. This went very well. 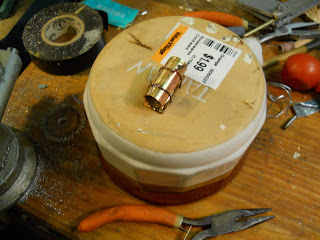 I turned a rod out of a Dremel tool shank. These need to be turned down to 3mm and threaded. They are around 3.2 mm so it is delicate. The only 3mm tap and die set I have happens to be M3x0.5 so that's what it got. Both ends. This is the pivot shaft; the pivot will rock about this. 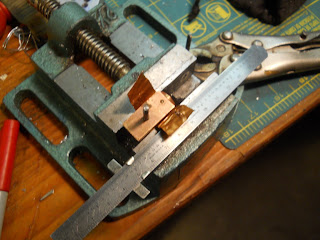 Next job is the frame. I took some pains to line it up. It is very fortunate that Ossies are very forgiving. 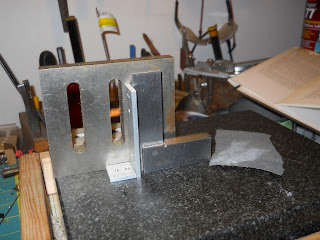 Then I drilled the port hole intake and exhaust ports. They are tiny, about 1.5 mm. Then I made some more little fiddly parts (go see Emma's video) And  then I discovered the holes would not line up. In fact the piston would not go in all the way. I soldered the original port block hole up. 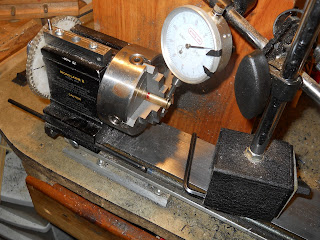 So I had to bore out the cylinder. Of course. It is an expended cartridge. Who knows what egg-shaped sections lurk in the heart of an expended cartridge? Had I done this in the first place, I would have saved a lot of time. In a limp excuse, brass is unobtainium in Alaska, except for cartridger, expended of course. The problem was indicating it. Because the port block has already been soldered I canonly indicate 2/3 of the diameter. I put up the 4-jaw chuck and did what I could.

So I turned a piston and voila, Marlon the .444 Magnum repurposed. 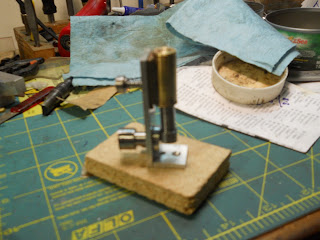 Still not right. Of course. The original called for a much thicker port block than I have. The piston was too short and the port holes would not line up. So I turned a new piston. Here is Version 0.2. 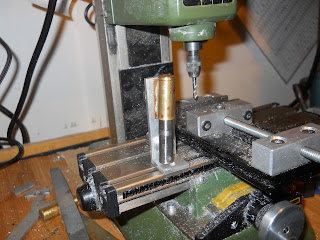 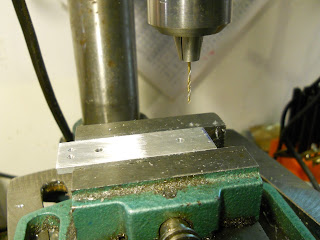 Today I drilled the hole in the port block. It seems to work.

So here we are. I will return, I hope.