Cutter project II. Getting there

I have been remiss in posting, but other things have interfered. As usual.

So we continue with making four-tooth cutters. We are getting there, but not quite. Still, progress. I am using 3/4" (20mm) supermanium steel from Lowe's. First step is to turn it round. The exact diameter is not critical. Then we slice off a 5mm slice. Hardest part of the whole thing, because The Taig does not like to part 20mm of steel. Then we put it on the drilling jig, and drill four holes in it. Equally spaced, if our drilling jig is up to snuff. I made on the mill, it better be! Then we mount the slice on the eccentric arbor which I have described previously. Here it is. As you see, one piece of the round sticks out. Exactly what we want. 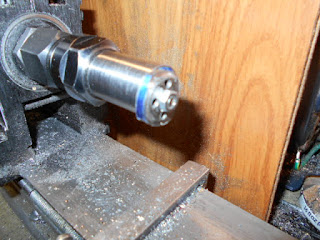 Now we proceed to turn a certain amount of material off. I have to watch the dial on the cross-feed very carefully. I mark the dials with a sharpie. What we want is a sort of square, but with rounded sides. We have to rotate the blank 90 deg after the full cut has been taken. After a while we start getting the shape of a square. Again, sharpie keeps me on track. After a series of cuts, we have to unbolt the piece, rotate it 90 degrees, and make some more cuts. The circle of holes go successively into the pin in the eccentric mandrel. 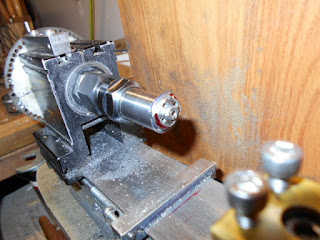 A closer view. Getting to square.  When I get a sharp corner I am done. Now comes the hard part. We have to form the radius at the bottom of the cutter. For this we use a form tool shaped like the radius of the cutter. It is less than 3mm. The form tool is plunged in. But setting it up on center is very difficult. I have since learned about something called the button method, which I intend to try. The Taig has no way to measure transverse feed. Unless you fit the compound. The Taig compound is very flimsy and I don't think it would work. A dial indicator would be great, but nowhere can I fit one in; the lathe is mostly aluminum. So my radii left something to be desired. 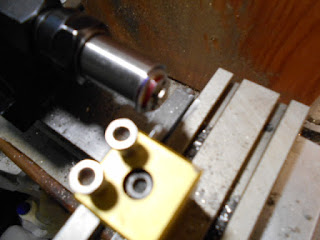 Next we take it over to the mill. I made a fixture -- a square wih a hole dead center -- so I can turn the thing over. Using an abrasive Dremel cutoff disk we "gash" the teeth. I did not get any pix, but it is in the previous episode. In the next pic, I have gashed radially at the corners. 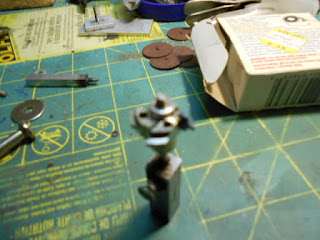 Then we rotate the piece 45 deg and gash again. One advantage of using the cutoff tool is that your cutter faces are automatically sharpened. You can see one of the teeth pointing at you, one in profile to the right, and even see the relief on the teeth. The relief is the sole reason we went to the eccentric arbor and the holes. Without relief, the cutter won't cut.

Still have to work on the radius. But this is much better than my previous attempt. Onward.