A chinook, and a trip on snowshoes

This morning we had a chinook. This is a warm wind from the south. When I woke up (at 4AM) the temperature was -7C, but by 8 it was +2.7. The snow was blown off the trees; I suspected skiing would be bad, and so it was. I managed my warmups, but when I turned on to a trail the dreaded snowball ski phenomenon took over. When it is wet, the snow forms a ball under your instep, making it impossible to go anywhere, so I gave up. One can cure this problem with fancy waxes -- klister, for instance -- but (a) I haven't any and (b) klister is very difficult to remove, and very messy. Aptly, klyster is the swedish word for glue.

However, in the afternoon I decided to see how difficult it might be to cut firewood in the dead of winter. So I loaded the sled with my beautiful japanese log saw -- a present from my offspring -- and strapped on my snowshoes (same provenance), and off I went. I had my victim marked, a downed tree obstructing my skiing. It paid for its impertinence. 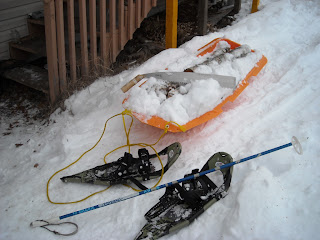 Snowshoes are a very different kettle of fish from skis, far greater effort, especially in deep snow. The great advantage is that you can stamp out a platform under your tree, and be stable when you saw. Above, you can see the sled, the saw, the logs, the snowshoes, and a ski pole I use as a stabilizer. Dragging this lot back home -- a matter of 300 meters -- was a workout and a half. The sled snags in the brush, your footing is not certain, going around curves is a production. But I did it. The log saw is a marvel. I could have taken a chain saw but I wanted to see how the hand saw performed.

Notes to self: next time, make a case for the saw, and take along a japanese sawbuck. It is hard enough moving around on snowshoes; having to hold logs by hand is an ordeal.
Posted by JRC at 6:23 PM
Labels: chinook, japanese saw, logging in winter