The return of the Navajo loom

Most of my troubles with the Navajo loom -- several posts ago -- were due to improper warping. The warp frame kept collapsing, turning from a square into a rhomboid. So it was time to do something about it, and as Darth Spader would say, behold warp frame 1.0: 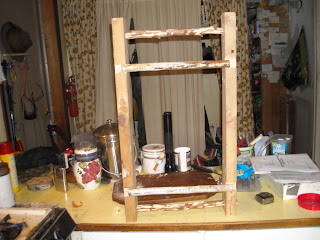 Nothing very complicated. Some scrap 2x4 and four sticks. Two sticks go through holes drilled into the frame and are held by wedges; the other two sticks are screwed in. They will eventually get unscrewed. This frame is solid. I put marks at 5mm intervals so I can get the spacing correctly. Right now I am using a 5mm interval; eventually I will experiment with other spacings. So let's warp it up. 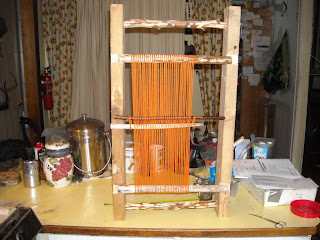 I am using thrift store yarn -- perhaps the waving gods know of its composition but I have no idea. The warp on a Navajo loom takes a lot of strain; but I couldn't break this yarn, try as I might. The warp, as I might of remarked before, is wound in a figure 8 around the horizontals. The two sticks "preserve the lease" -- keep your figure 8 in the middle of the frame. It is now time to do the warp spacers. This is a distinctive feature of Navajo weaving, and keeps the warp spacing constant. There are four twisted yarns, retwisted about the warp threads. 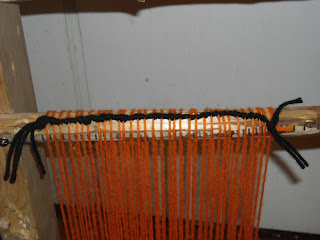 Now we sew the tension bars onto the warp frame bars with a big needle and some strong cord, going through the warp spacers We add double cords on each side, which are the traditional Navaho side selvedges (long edges, in plainspeak) and transfer the whole works over to the loom frame. 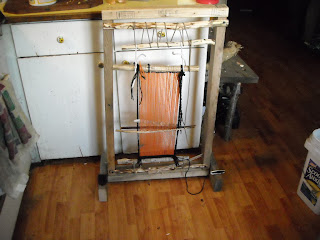 I have also tied the heddle stick, the crooked white stick that pulls out alternate threads to make a shed. There is no reason for it to be crooked, it's what I had on hand. We are ready to weave. 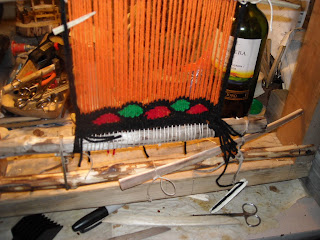 There are red and green blobs in a black background. These are supposed to be tapestry ovals, but hey, I'm learning. Unlike R.M. Meluch, who I cited elsewhere, I have no Navajo spirit weaver as a guide. I call them turtles. The sword-like object in the lower foreground is a batten (I prefer R.M.'s term baton, but as a matter of fact, "batten" is indeed derived from baton, so that's OK). You can also see a shuttle in the foreground. And a bottle of Chilean wine in the background. A great temptation when weaving, which is a constant battle with topology, gets difficult. So far I have resisted it. You can also see how the warp spacers are sewed to the tension bars.