Long ago I thought I might end up making miniatures (little did I know) and a little Stanley plane showed up at a hardware store, cheap, and I bought it. It turned out to be awful. Stanley used to make good tools but I fear that they have fallen into the clutches of the dreaded marketroids, creatures with MBAs whose god is the bottom line. Perhaps Stanley meant it to plane balsa wood. (By the way, balsa in Spanish means raft. This fact did not escape the eagle eye of Mr Thor Heyerdal, when he built Kon-Tiki out of balsa logs and sailed it across the Pacific. But he didn't plane anything on that raft.) So anyway, I thought a new body might help rescue the marketroid monster. I could make a new body for it. Krenov method, natch. 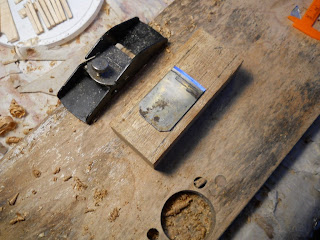 Above the original plane, ugly black, minus the blade. You can see that it's a cheap channel metal with a cap which goes into slots in the metal. Below it is a block of wood, blade on it, as we lay out the long rips that make the cheeks of the planes. If you search for "Krenov planes" you should find the post I did on the method, in great detail. The blade calipered out to 25.4mm wide, so it's an inch in RGU, exactly. 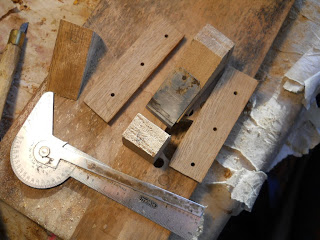 And there it is all cut out. Notice I drilled the registration holes already. This is a mistake. I should have read Krenov (or Finck) more carefully! There is a reason for this. We want a very narrow throat on the plane. The way we do this is by planing the plane! We plane the sole (with another plane, of course) until the blade just goes through. Many a planing failure is due to a wide throat. Moral: clamp it together so's the blade is about 1-2 mm above the throat opening. Then drill the registration holes.

So we went to the gluing-up operation, made a wedge, and out came Plane Jane. 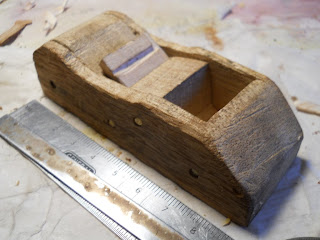 Already much better than the original ugly; but when I finished planing out the sole it was much too wide. See above under mistake. So I had to inlay a piece to close the throat. A good throat depth is 1 or 2 mm; more than that only for very rough planing indeed. Good practice for inlay work, look at it that way. 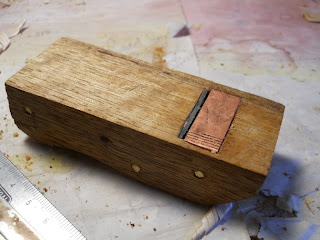 The inlay is a piece of copper beaten out from old gas pipe. You do not need Titanium alloy in a wooden plane. Copper is much easier to work. Jane is a vast improvement on her original form; but the blade is really too short so it is hard to adjust. It is also very difficult to sharpen. It is difficult to hold the proper angle on such a short blade. But I am one up on the Stanley marketroids. I will be very happy if I can figure out what to make of the leftover original parts.

One of these days I suppose I should post all the stuff I have learned on tuning planes so that they actually plane. But Mr Garret Hack has already done so; read his The Handplane Book (q.g.). Lots of good information in Krenov and Finck, too. There is probably all sorts of stuff on line but I haven't looked. If you buy a Veritas plane from Lee Valley (q.g.) or a Lee-Nielsen plane, you can plane out of the box. You will pay dearly for the privilege. No others need apply. You buy a secondhand plane, or build one yourself, you have to learn to tune it. It is not difficult. End of rant!
Posted by JRC at 6:38 PM
Labels: Krenov planes., miniature, planes