A tisket, a tasket, a birchbark basket

It is New Year's eve. Out here in the bush it has no real meaning; it is an arbitrary date switch and I, for one, am glad 2011 is over. So my post has nothing to do with auguries, although I wish my readers a very happy new year.

So still on my four-year old project (4YO) kick, I had suggested, in the Bodger's forum, a bark basket, or box, following the directions given by Louise Langsner in Country Crafts, a book out of print but available from secondhand dealers. Louise's article suggests poplar bark. This is what the Cherokee indians used for berry baskets. Not much luck with poplar in Alaska, although aspen might do, it is a relative. So I used birch bark. It was very dry. It had a will of its own. It did not want to bend. It hated me! But on with the tale. First you trim your bark into a rectangle. Mine happened to measure 14 x 28 cm. Find the middle of the long side. Draw a line across it. 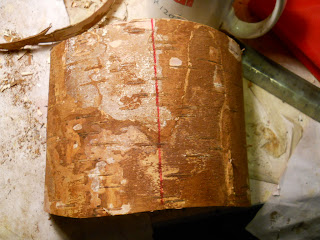 For this you need but a ruler and a felt-tip pen. And three hands, because the bark keeps curling up on you. Now, measure out something like 25mm from each side of the line, in the middle of the line. Sketch an oval. It is a really good idea to make it symmetrical. 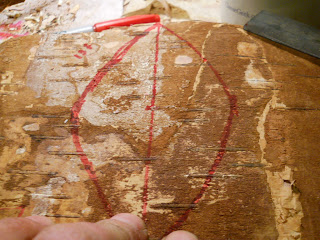 This is the bottom of the basket, or box. If I had gone and read the Langsner book before I did this I would have found that the lines should actually cross, say 5mm before the edge. Bad on me. However, I got away with my oval. Next step is to score the oval. Louise suggests a knife. On this old dry stuff, a V-gouge worked much better. 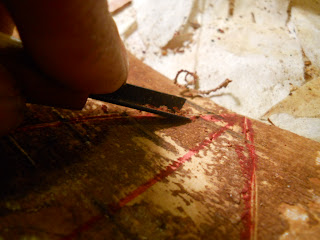 The reason for the scoring is that you will bend the sides up to form the basket. If you don't score it, the bark will refuse to bend where you want it to bend. After bending you will lace it up. So now is the time to make the holes for lacing. You do not want to do this once the basket is bent. I marked off 1cm intervals for the holes and drilled them about 5mm in. Do not skimp on this allowance. It is very easy to tear the bark. 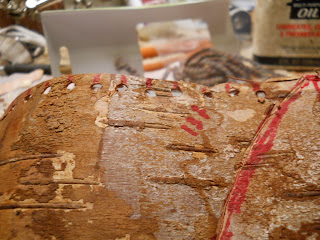 I used a cordless drill for this. With my recalcitrant bark and just me alone, I could hold the thing down and drill one-handed. A leather punch would work also. But do drill or punch before lacing.

Now you bend the sides up and lace them together. But what do we use for lacing? The Cherokee used the inner bark of the hickory tree (bast) or indigenous vines. In winter Alaska, this is infeasible. So I used some rather nice yarn that I bought at a thrift store for my weaving projects. It is probably synthetic and it is very strong (I can't break it). So we broke out our blunt needle and laced it up. 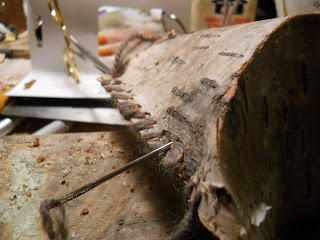 I found it very useful to clamp the edge while lacing up. For this I used a surgeon's hemostat. Maybe your doctor will save them for you, but it is probably illegal for him or her to do so, so we resort to Wal-Mart where they sell these things cheap. Only they call them fly-tying clamps. I use them them for fly-tying, indeed. They are made in Pakistan, of all places.

If you are going to do this kind of stuff (or weave on a loom) a set of really heavy-duty needles is mandatory. You should have some sharps and at least one blunt. I buy mine at the grocery store in Big Lake, Alaska, so they can't be too hard to find. Mine are trilingually labeled, in accordance with NAFTA: English, Spanish, French. Regardless of label, you need them. I used a simple over-under lacing. You could use two needles and do a crossover.

At the end of about one hour, we have a basket, or box depending on your preference. 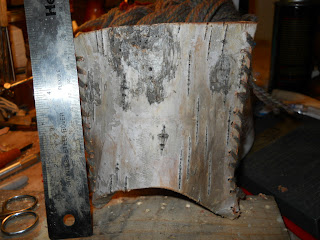 So I did it. I have a basket/box. Now we come to the burning question: is this a 4YO project? I would say that if you have fresh green bark, definitely. Yes, it is. If you have dry bark, no. Don't even try it. Too frustrating. The dry bark has a will of its own, and it took a lot of coaxing before it cooperated. Could you steam or boil the bark? I have tried this. It makes it worse, in my opinion. With birch it seems to curl up tighter than ever. So it is a definite springtime 4YO project. Of course if you have poplar at your disposal, it may be a completely different story. All I have is birch. Remind me to try aspen sometime.

After all this was done, I thought the box needed a neck-strap. I went to my inkle loom and finished a strap I had on it. As soon as I figure out how to attach it I will post again. I will also post on inkle looms. Although the set-up is not for 4YO, once you get it set up even a chimpanzee can weave on an inkle loom, with parental supervision of course.
Posted by JRC at 6:50 PM
Labels: 4YO, birch basket