A case for cell phones

Cell phones are a blessing and a curse. The blessing is that they are everywhere. Here in the USA I know of no place that has pay phones any more. Cell phones also double as rather expensive watches -- if you have one, it tells you the time. Since most of them have some kind of GPS they would even double as a locator; but most of them have no way to read out your location. On the curse side, I find them incredibly feature-laden, all with features that I neither want nor use (such as texting), and the batteries are subject to failure without prior notice. Such was the case with mine. You have to put the things somewhere. Pocket is a bad idea. Bump something and you hit a key. Phone comes on and wastes battery. I wear my phone around my neck. But all these phones seem to lack a carrying strap attachment hickey. Forgive the rant, but it is a sore subject with me, and it's my blog, so I can rant. Once in a while, anyway.

Long and short of it is that I decided to make a cell phone case I can wear around my neck. That famous British Special Forces outfit, the SAS, recommends that anything you don't want to lose in the woods you carry around your neck. Right. Compass, cell phone, and GPS. So let's make a neck-strap case for our cell phone.

First step, obtain material. I had some old glasses cases, courtesy of Costco. They are some kind of synthetic leather, no doubt from the hide of the fabled Naugalope. So with an X-acto knife you do an ectomy of the hard plastic insert. Take out any stiches while you're at it. You have an oddly-shaped rectangloid about 20x20 cm. You carefully wrap it around your cell phone and cut it to suit. Leave a super-generous seam allowance. You will trim it later. Makes it easier to stich up. You could, of course, use real leather. You want something quite stiff, to avoid inadvertent key presses and consequent battery drain. 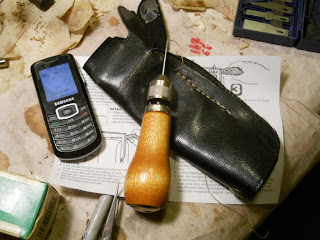 The above still life shows the culprit, er, I mean the cell phone, the leatheroid and my invaluable stich-it awl obtained from Lee Valley. It has been made since forever. If you do any leatherwork at all I would strongly suggest you get one.
My awl suggests www.speedysticher.com but this URL is up for sale. However, if you google on "sewing awl" you will get some useful results. All is not lost.

You need to sew up one side and the bottom. Then test fit the phone. If all is well (it fits) you can proceed. Note I left enough material to make a top flap, and there will be lots of scrap so you can make a closer. I spaced these stiches by eye (it shows) but you can use a star-wheel cutter (often sold at cooking equipment stores) to space them more evenly. Then trim up the case. Scissors works fine for this leatheroid substance. Next job is to cut out a flap and a flap closer. 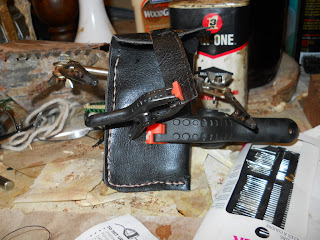 The flap is just some stuff left over. The closing strap is a also a leftover. I sewed it in (fabric cement did not work). The original glasses case had a velcro closure. Marvellous stuff. It has two polarities, so to speak, the fuzzy side and the hook side. So I did another ectomy on the case with a craft knife, and removed both poles from the original case. I used Super Glue to reattach them. When you do this it pays to clamp it down. At the low temperatures we enjoy in an Alaska winter, even Super Glue takes a bit to set up, so I use clamps as shown above.

And the last step is to sew on a loop of line to go around my neck. I use old fly-fishing line. But my next inkle loom project is a suitable neck strap for my brand-new cell phone case.

It is quite amazing. My battery life has gone from 24 hours to 6 days (still counting). A nice morning's work, indeed.
Posted by JRC at 7:51 PM
Labels: case, cell phones