A Christmas Carol, I mean Ulu.

Now all may be revealed. Christmas is over. I have to catch up on my Christmas projects. The first one to appear will be KZ's Ulu. Now an Ulu is a Northern Native knife. I am appalled that I can't give you a label, but I have posted on it before. I now have an "ulu" label. I make my ulus out of old circular saw blades. I will have to repeat some pictures of the manufacturing process. I take an old circular saw blade and cut it into fourths, first removing the teeth. For this I use a circular saw with an abrasive cutoff blade. I cut the saw into quarters, much like a pie. 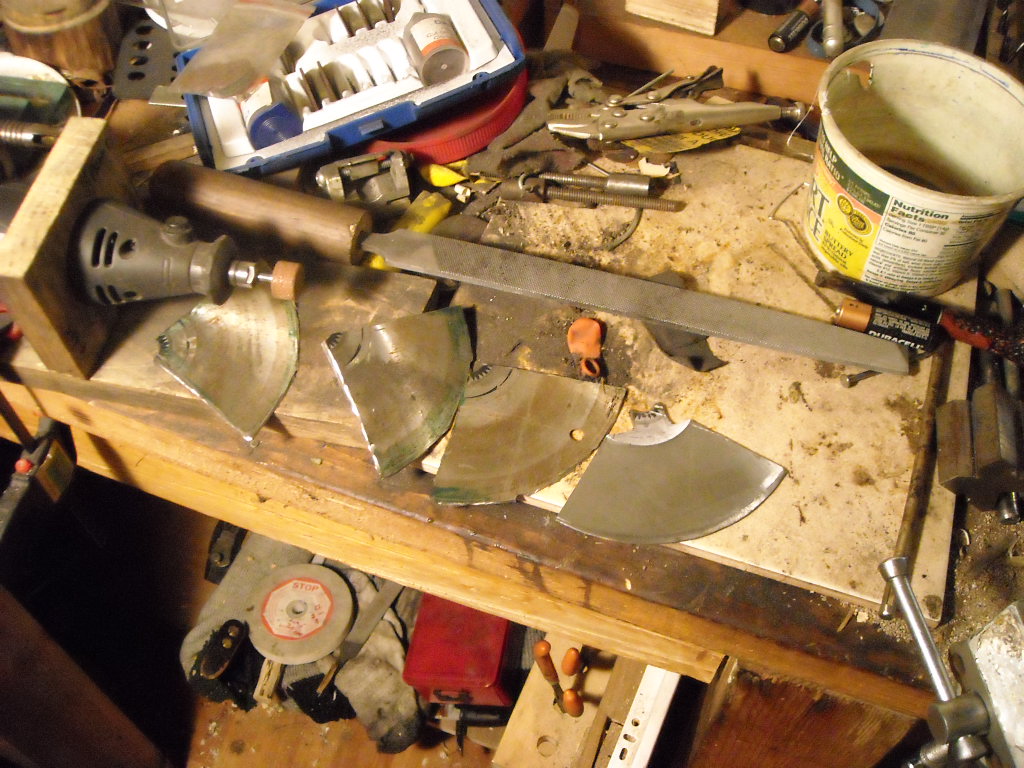 Now we have to grind the edge on the thing. For this, I use my wet grinder and my homemade ulu-grinding jig. 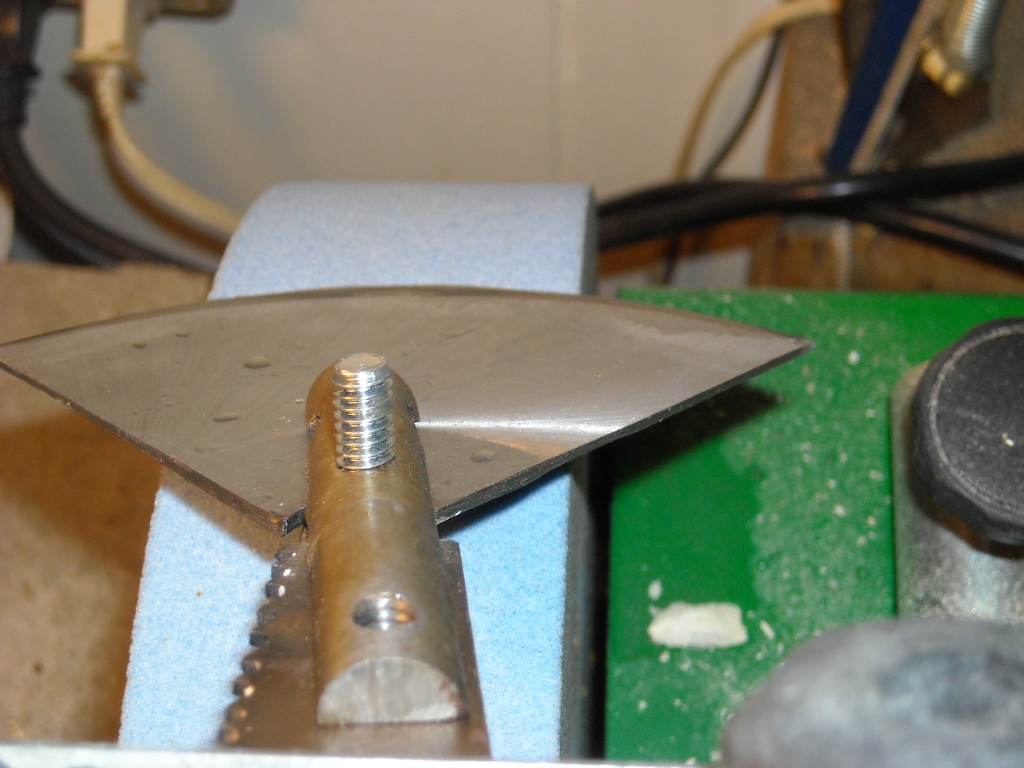 The jig allows me to rotate the proto-ulu pie slice. If you did not do that, you would simply grind a flat ulu. Not at all what you want. So grind and rotate. Use the angulometer to get the bevel angle, in my case 25 degrees.


Next problem is heat-treating. Circular saw blades are built to take abuse, since that is the fate of a mass-produced saw blade. But as a result they are almost impossible to sharpen. Not what we want. We want to put a real edge on these things. So what we want to do is soften it up a bit. My usual procedure is a propane torch. But an ulu is much too large for this treatment. So I used the kitchen stove instead. A lot more BTU than a propane torch. 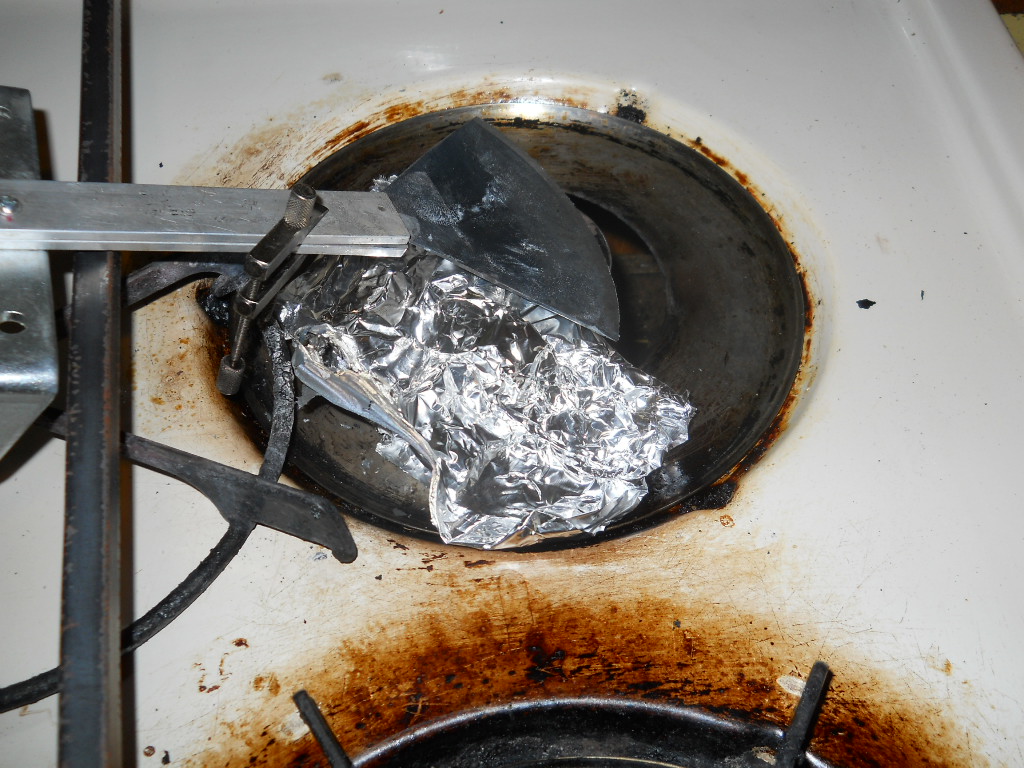 Here, I hold the edge of the ulu in the convenient circular shape of the stove burner. Aluminum foil helps keep the heat away from the body of the ulu. I want it to blue, but not to anneal. Tougher that way, you see. I want to temper the edge to "straw" as the books put it. Straw indeed. Looks golden yellow to me. When it gets to the desired color, you quench it in a butter tub full of water. The ulu is still held in its grinding jig. This makeshift arrangement actually worked. I got a tempered edge and a blue body.


Next step is to put on a handle. 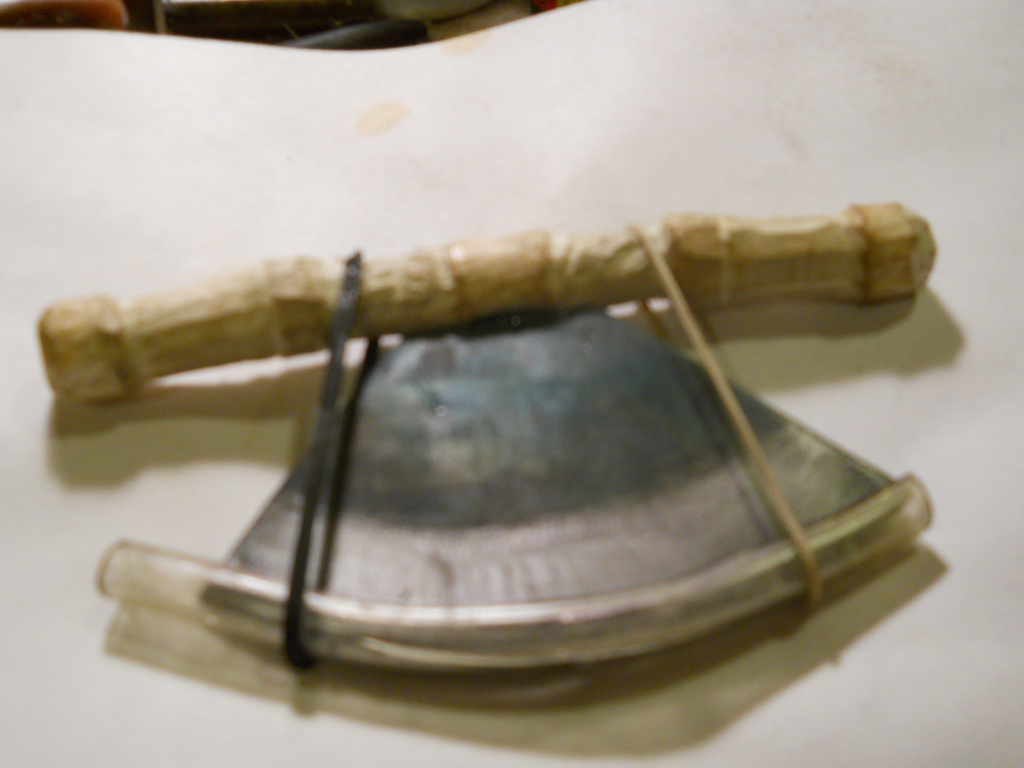 In KZ's case, there is a totem pole handle carved from an oddly-shaped birch sapling. I created her totem pole. This was a straightforward piece of carving;  I enjoyed it as a big change from all this metalworking stuff. Note the edge protector. Very important to have an edge protector.


The last step is honing the thing. I use my Lee Valley diamond hone for this job. It may be tedious but it is necessary. A dull tool is dangerous, period. I was very pleased with the bluing on the upper part of the ulu. Exactly what I wanted.


I made a similiar ulu for Fluffy, but I did a turned handle for it. I turned it on Polecat, my trusty pole (bungee) lathe which I documented before. Fun. Lovely turning, too. I forgot to take a picture. I think making ulus is a great game. Furthermore ulus are useful. I chop almost everything with a ulu except when I emulate Jaques Pepin. Then I use a 30 cm chef's knife. That is a better slicer, but the ulu is a better chopper any day. Those Inuits know what they are doing. In Point Barrow they flense whales with ulus; only much bigger than mine.


By the way, the pattern I use is the so-called "Fish River" pattern. I do it because it is less work than other patterns. If you google on ulus you will find various learned works on ulus. Happy ulu new year!