So just when you thought you were immune from clocks, I have to return to them. I warned you. Clocks are an obsession. Great thing to do in the winter, though. have had a snowstorm and there is a new 40 cm on the snowpole! 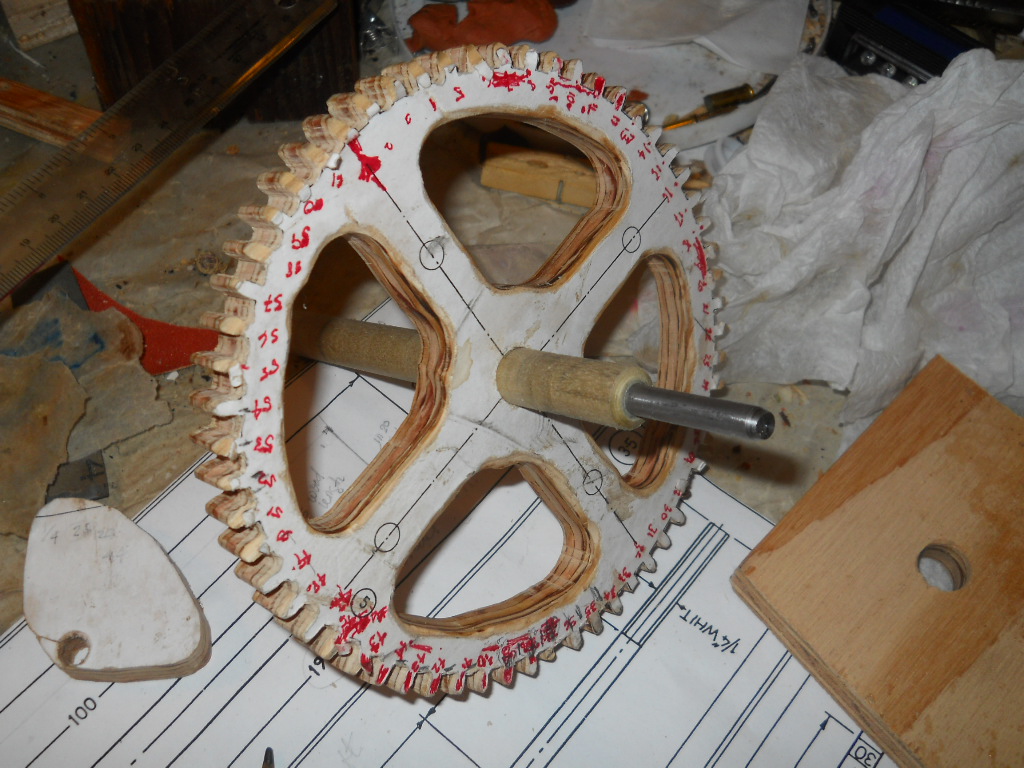 The above picture shows the center wheel. Mr Wilding (whose instructions I am following)  would spell it "centre wheel. " Engineers would say "gear" but I too bow to clockspeak. After all it has been around since the 16th century, if not longer. The pic shows one end of the center wheel.  Mr Wilding put steel ends on his wheel axes. Sound idea. Cut down on friction. Almost any clock plan you will find on the Internet has solid steel arbors (axles). The other end of this arbor is a point. Here I am turning the point on my trusty Taig lathe. I have finally learned how to turn points. It requires a contraption called a compound slide in the US and a top-slide in the UK. No matter, same thing. I could have done it with a file, but the compound is much faster. Good practice, too. Voila the point being turned. By the way, the things we are turning are called pivots in clockspeak. Bearings from where I come from. 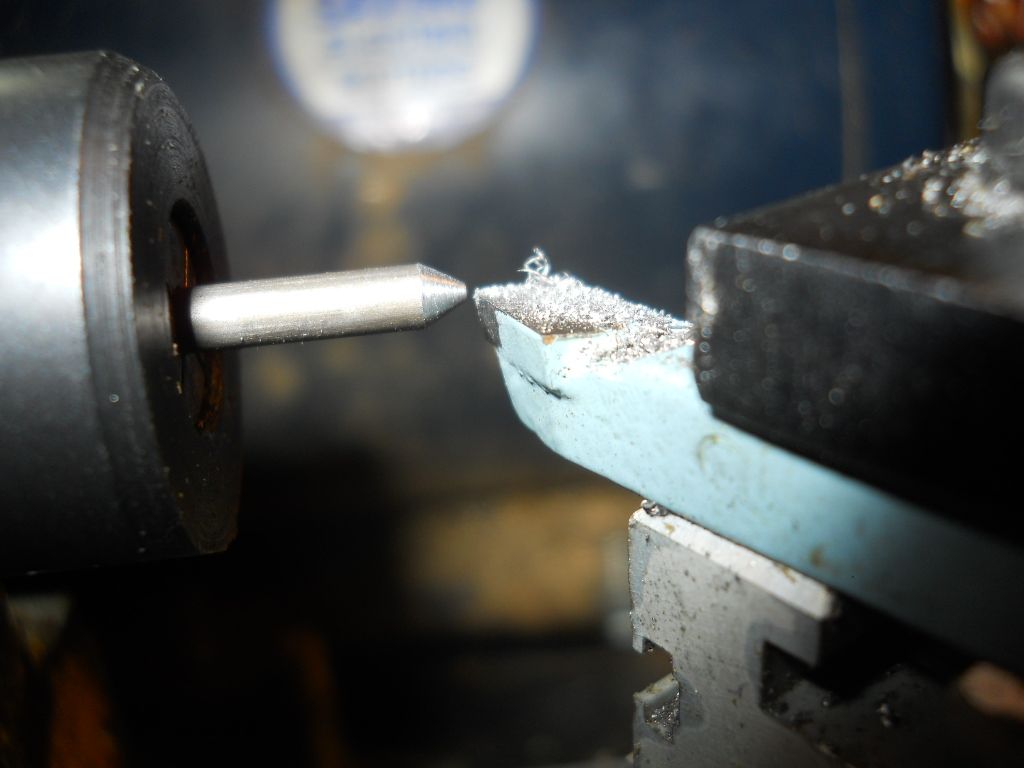 In Mr Wildings's modifications, the points run in brass bushings. A bushing is just a piece of something (my case, brass. And by the way it is very difficult to find brass in Alaska. Not a material in great demand here) with a hole in it. No big deal. However, the bushings must be reamed out to a 60 degree point to accept the points. Further, the holes you drill must accept the bushings as a tight fit. In fact you should press the bushings in. I used my drill press as, well, a press. This means that you cannot trust the hole sizes on the drawings. On the balance, this is not a clock for the amateur.  As the British say, the words do not match the music. For Mr Wilding, who has built more clocks than I have passed power poles, this is no problem. I have had a few problems matching up the two. If only he had corrected the drawings! 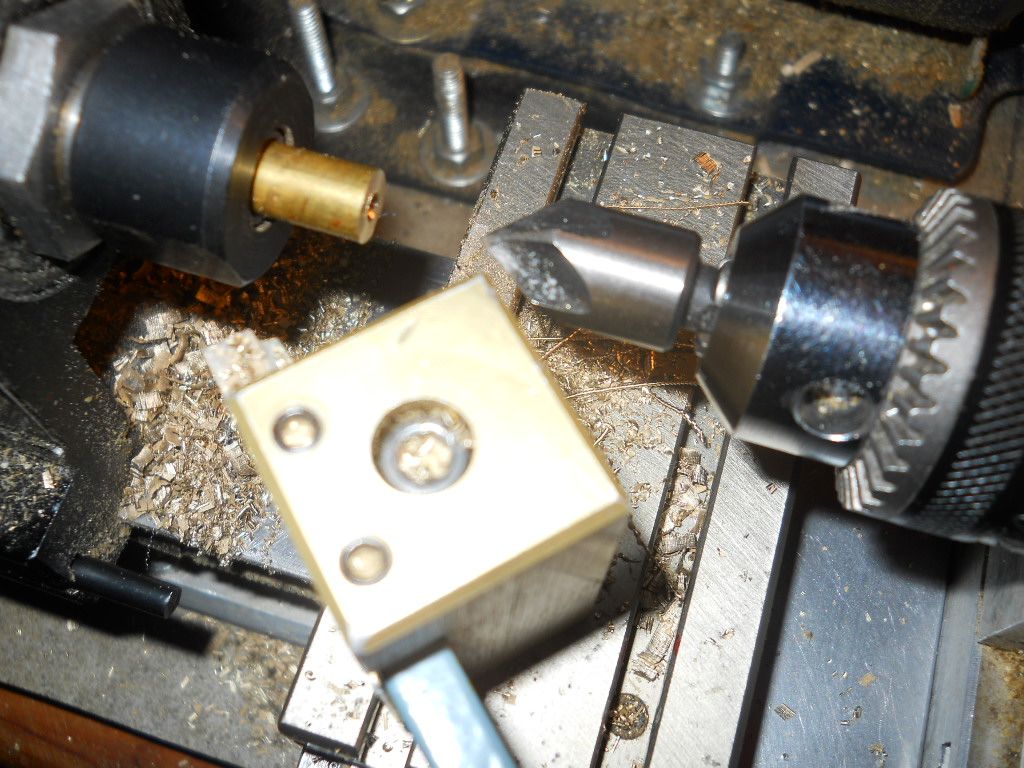 Above, I am using a 60 deg reamer to ream out the bushings. No major problem there. Next problem is pushing the bushings into the "plates" of the clock. The   plates  are the frame of the clock. If you happen to use Mr Wilding's instuctions you will have drillled undersize. For pressing I use my drill press and brute force. I was careful to drill the holes undersize. A nuisance when it is all done, because I work metric and all my stock is Imperial i.e. RGU, but it can be done.

Here I am pressing the bushings into their holes.I used a 60 deg point. These babies are not coming out with any ease. Good. 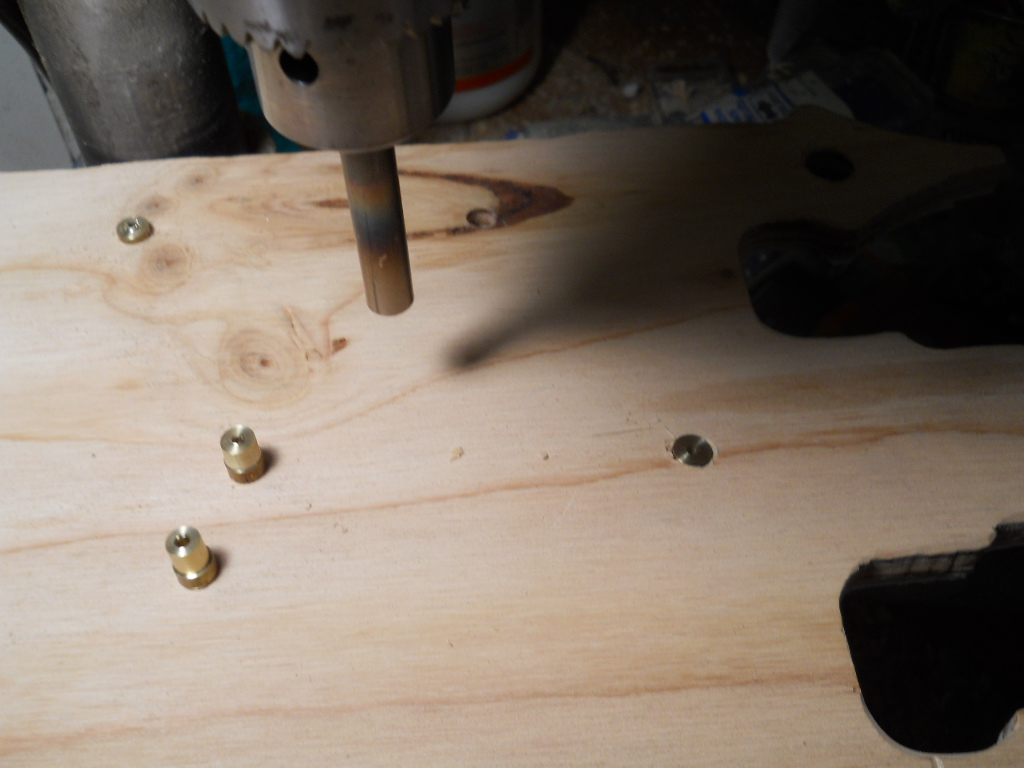 The next step is to assemble the clock. Again Mr Wilding fails me. The drawinngs all use numbers, but Mr Wilding uses names (third wheel, fourth wheel, etc.). I  really wish  he had corrected the drawings. No matter.  Let's start assembling this thing. First thing in is the  escape wheel: 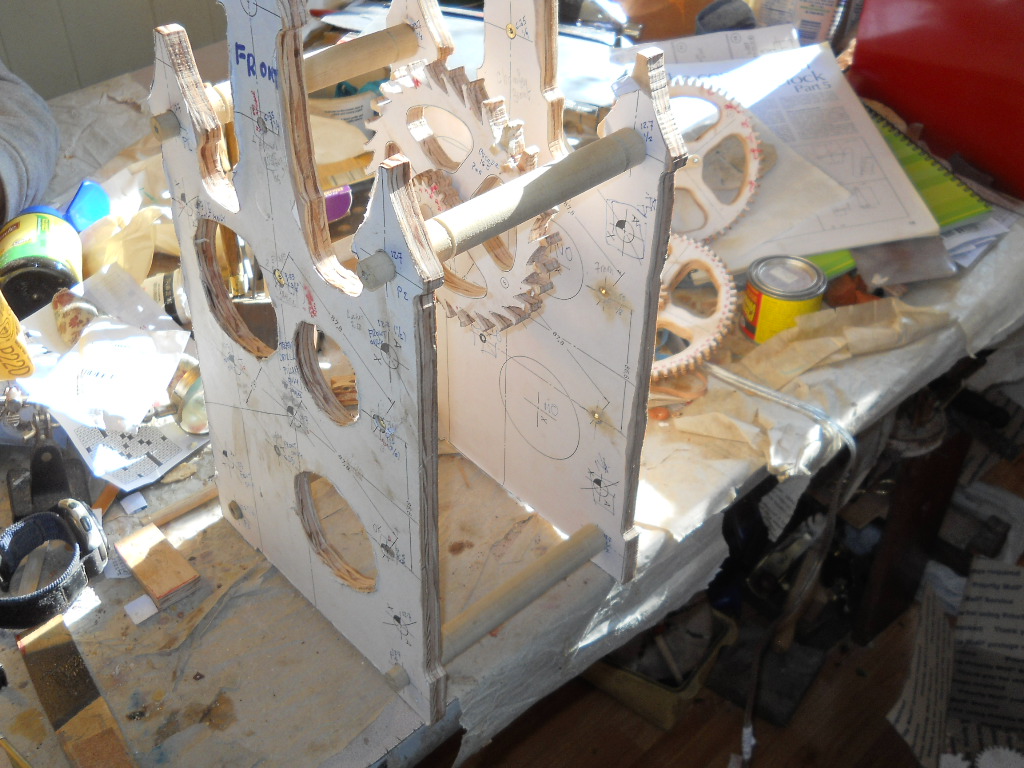 And next, the third and fourth wheels. Which are obscure numbered parts on the drawings. Grr. I wish Mr Wilding had supplied corrected drawings! No insult to Mr Wilding, but this is my first clock, and the words don't match the music. 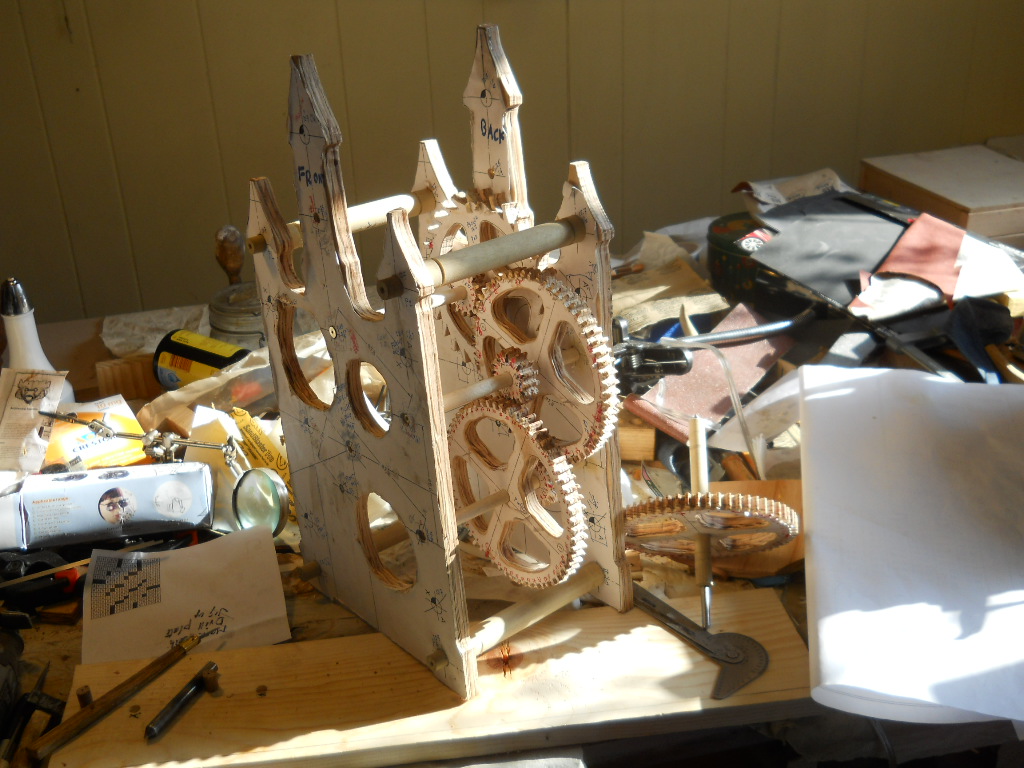 Looks like a clock, does'nt it? But alas, there are trials yet left. Although we carefully "depthed" the wheels, the thing sticks. It does not run freely. Lots of reasons, but most likely, when we drilled the holes for the arbors, we did not do it quite right and there are some sticky spots on the wheels. Stay tuned. The wheels must spin freely or we are lost. So back to square here minus one. More to come.

I note that most modern clock plans specify steel arbors. Running on hardwood bearing holes. Probably cheating! But much easier for a good woodworker than the stuff I am going through. And all in RGU, too. Drill 17/128th of an inch. Why oh why RGU?