El conuco, part I of many

Conuco is a Venezuelan word, derived no doubt from the Carib language, which translates to "vegetable garden." However, a conuco has many connotations that are usually not associated with a veggie garden. It implies rough and ready, rural, and not, perhaps, up to the latest agronomical standards. So I began to garden in 2006.

In another lifetime, in Maryland, I had tried gardening, but it was difficult. The rabbits, for example, ate most of my garden before I could do the same. My neighbor had no such problems and produced agricultural wonders from 50 meters away, but then, he had a green thumb, among many other talents. Fast forward to 2006. There was a place on my land where I could see beds through the weeds, so I took my trusty garden fork and dug up the weeds. It was a major workout. 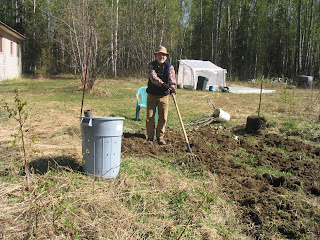 At the time, I did not understand the meaaning of "sod" -- the collection of matted, snarled plant roots that underlies anything that hasn't been gardened for a while. I suspect my predecessors didn't garden, and that the rows date back to antiquity, or anyway back to 1985 when the house was built.

So I cleared out four meters of junk from the rows. As I say, it was hard work, but strangely satisfying. The result was conuco, v1.0. Four meters of garden. 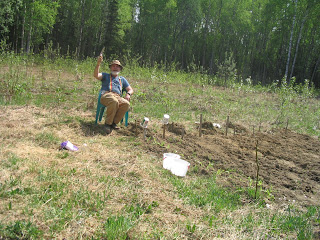 Knowing I was going to have a garden, I had started some lettuce in containers previously. You see me above after I transplanted the lettuce. Four meters of lettuce is enough to feed the entire russian village, let alone me, but I didn't know that at the time. We learn from our mistakes. But at least I had some rows dug.

Do you know, stuff actually grew, not only in the garden but in the greenhouse. 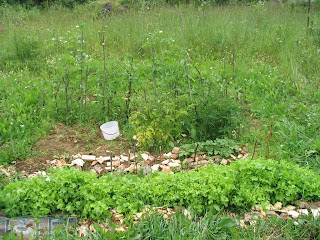 All that lettuce. Wow. The greenhouse wasn't too tacky either: 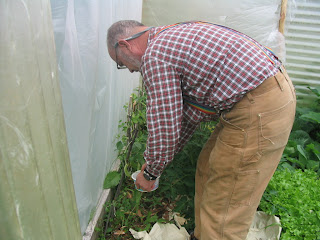 I don't know what ws greener, me or the garden. But we had some good results in a few areas, for instance cucumbers. 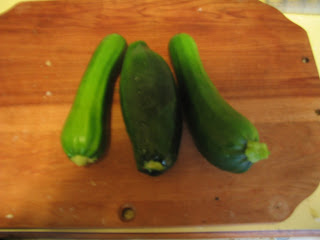 I don't think we had ripe tomatoes in '06. But then, I can't remember having ripe tomatoes ever. Since then, we have swung over to the "cold cycle" of the North Pacific Oscillation (NPO) and without heating, I doubt that I will see ripe tomatoes at Chalupy. We keep trying, though. It is really hard to garden in Alaska, because the season is very short, basically Memorial to Labor day. I have seen frost two days after Memorial day. On the other hand, the long daylight hours mean some crops (cabbage, for instance) achieve gigantic proportions. At last year's State Fair, one cabbage weighed in at 83 lb, about 40 kilos. It is probably quite inedible.

So on the whole, it was progress. I had lettuce galore, some cukes -- I was happy, anyway.
Posted by JRC at 8:01 PM