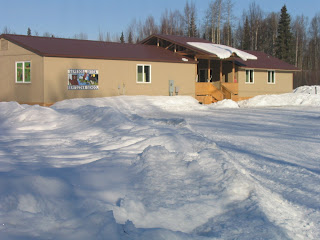 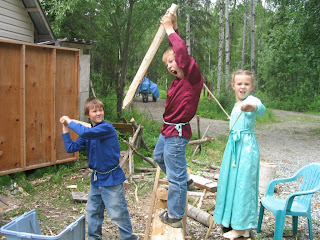 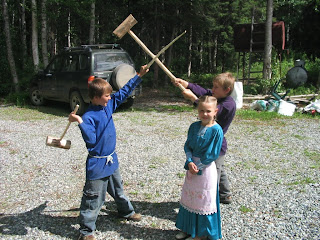 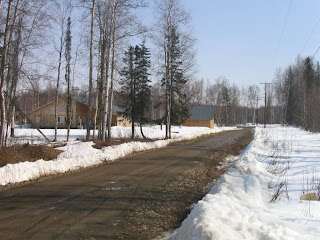 Sometime ago -- perhaps around 1980 -- a number of families escaped from the Former Soviet Union and somehow wound up in bush Alaska. ("The bush," by the way, is how those of us who live at some distance from the urban centers refer to our environment.) These people, with names like Reutov, Polushkin, and others, are "the Russian Village," as the rest of the Willow inhabitants call it. They are very traditional and very polite. One of the houses appears in the picture, taken obviously in spring because you can see bare ground. Their kids come to me for woodworking instruction. They usually wear traditional Russian dress; I find it very appealing. As kids anywhere, they are obsessed with armaments. Observe, in the second picture, the formidable variety of weaponry. Neoni (in the required long skirts), looks innocent and oblivious of the boys fighting each other, but this is not so, as you can see in the next pic. No wonder Napoleon and Hitler retreated before Moscow. But sometimes I feel like an arms merchant, a "dog of war" as some would have it. However, slowly I fit into the village in spite of the fact that I don't speak Russian very well. Once I took a course in Scientific Russian (reading). So I can puzzle out the Cyrillic alphabet, at least. The kids are completely bilingual; they attend the local school, which has about 15 students. All of them are two years ahead of their contemporaries in the public jail, I mean public school, system. Strangely enough, Beryozova school is a public state school. Some days Alaska really shines. In Russian "beryozka" is birch; Beryozova would mean "of the birches" or possibly "in the birches," Russian is not big on prepositions. But it's a lovely place to live.
Posted by JRC at 7:24 PM
Labels: kids, village