In my visit to Talkeetna I posted about trains and planes. This is a follow-up. I drove into Anchorage the other day -- a 130+ Km drive that I don't like to do at all; on my way back bingo! I saw a train stopped in Wasilla. Instant pull off and unlimber the camera. Push to extreme tele: 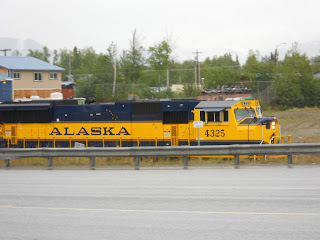 And there she is, 4325. Double headed, in fact, pulling a longish train up to Denali Park, Talkeetna, and maybe even Fairbanks (although I doubt it). The consist, as we rail freaks (actually, the railroads themselves call) the list of cars being pulled, was all passenger stuff. 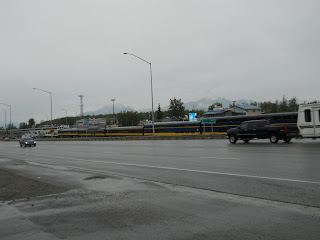 No doubt full of tourists. "Tourist" may be a bad word; but it is extremely important to summer survival in Alaska. Everyone depends on it. I'm glad the consist is so long; means lots of people are headed to lodges, campsites, "and etc." up near Denali.

So now, you are thinking, he's going to put some airplanes into the post! You know me quite well, I see. Of course. I happened to walk by the Willow floatplane dock, and stopped to take some pictures. The occupants of the dock were these guys: 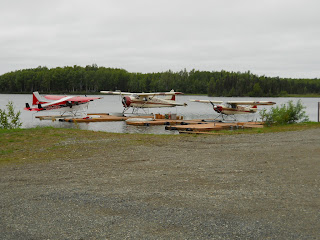 In the center is the iconic De Havilland Beaver, built in Canada in the 1950s by De Havilland (Canada). A magnificent airplane, with a huge payload capacity and a big radial engine with a mellow, basso sound. I can tell it's a Beaver (or maybe an Otter, slightly larger) from the sound of the engine alone. To its right, a smaller floatplane I can't identify offhand -- maybe a Cessna; and a Strange Plane to the Beaver's left. More on that. As I stood and wondered, as if by magic a party of fishermen appeared and loaded their paraphernalia onto Strange Plane. 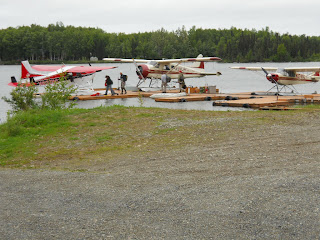 When they were all buttoned up and ready to go, they got a push away from the dock... 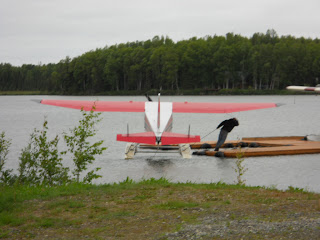 Engine started, we taxied out towards the "runway" -- don't think this is correct on a lake, but anyway... 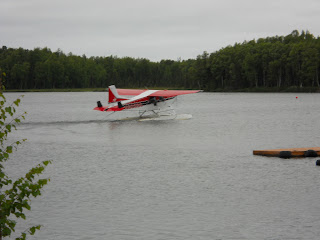 And off we go! 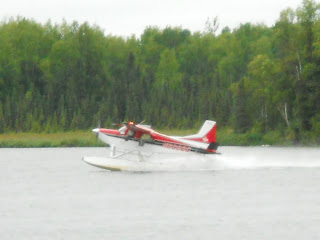 Some work with binoculars and Google reveals the identity of Strange Plane. It is a Found Aircraft Ltd (Canada) Bush Hawk. If you Google these terms, you, too, can find out all about the Bush Hawk. Glad to see the Canadians are still making bush planes. De Havilland, of course; but also the Noordyun Bushmaster (a classic) and now the Found Bush Hawk. Bravo Canada!
Posted by JRC at 7:42 PM
Labels: floatplanes, planes, trains, transportation