I am running behind on posts, because the 'net was intermittent last Wednesday and out on Thursday. So bear with me. Which reminds me that I have only seen one bear this season (next to my bedroom window. I spoke to him severely on the subject of trespassing, and he departed at high speed. Perhaps I did threaten to turn him (or her) into a rug, but that's just talk). Anyway, the gas line on Siegfried, the big chain saw, went west. The nearest dealer is in Talkeetna, so up the Parks highway I drove, somewhat hampered by construction.

Talkeetna is an interesting place. I call it the Greenwich Village of the Mat-Su valley. All kinds of craftsy people hang out there. It is also the jumping-off place for an assault on Denali (shown on maps as Mt. McKinley, but nobody in Alaska calls it that) so in summer it is a busy place, and beseiged by tourists, who can get there by a variety of means.

By far the most picturesque is the Alaska Railroad. This is an Alaska institution, worthy of a post all by itself. When I got "downtown" I found the Alaska railway fully represented. 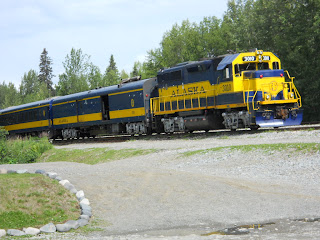 Note the snowplow on the loco, AKA 3010. Alas, the AKRR does not run steam (I am a railway freak and a steam maniac) but one has to put up with many disappointments in life. This is obviously an excursion train out of Anchorage pro bono tourists. The train was on a siding; it soon backed on to the main line. 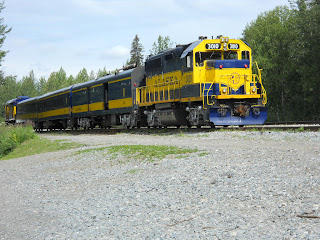 So soon the turistas will clamber aboard and enjoy a scenic ride back to Anchorage.

But if you want a more modern form of transportation, there is this: 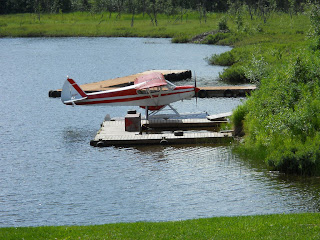 This is a floatplane service in Talkeetna. They will fly fishermen to remote lakes, vacationers to inaccessible cabins, tourists to glaciers, and whatever else offers. For a fee, of course. Operating a plane, even a putt-putt like a Cessna, is expensive. I have got to do a post on floatplanes; as you probably have inferred, I like planes.

Finally, and very prosaically, you can drive up the Parks highway to about mile 95 and take the Talkeetna spur into town. So you can't get to Talkeetna by boat, but you can get there almost any other way, including bicycle if you are hardy enough.
Posted by JRC at 7:15 PM
Labels: float plane, talkeetna, train