It started Sunday a week or so ago. There I was, making a stick stool, when who should appear but Neoni and some friends. 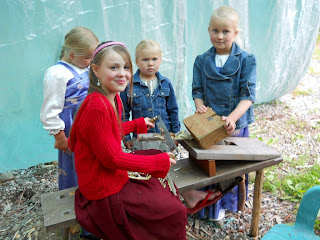 The three girls in blue are not village kids; they are visiting from any of a (large number) of Russian communities in the Mat-Su valley and elsewhere. A parenthetical comment: most hospitals these days have emergency room signs -- you know, the ones that say what your "rights" are -- in English and Spanish. But not Mat-Su Regional. English and Russian is what we have. Says something about Mat-Su, I think.

What would you like to do, girls? We want to make something. Anything. Would a stool do the job? Sure. So off we went. So let's shave out the rungs. Neoni, as you can see, is an expert shaver. She needs a longer treadle, but her younger cousins need it the way it is. Compromises, compromises.

So we shaved a bunch of rungs, and got the sides of the stool assembled. Neoni's frends learned the golden shop rule the hard way: do not touch anything in my shop without my express permission. Everything here bites, scratches, or claws. One stumble across the dragon anvil got that lesson across very quickly.

A few days later, we had the original crew plus a bunch of boys. The boys wanted wooden knives. I try to keep a bunch of splits for just such an occasion; swords, axes, and knives are much in demand. The Chalupy Armament Subdivision swung into action: 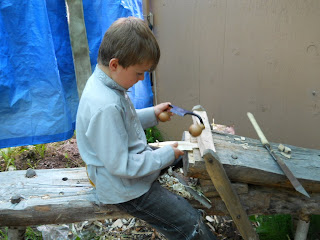 As time went on, we had a larger crowd. Some were interested in the stool: 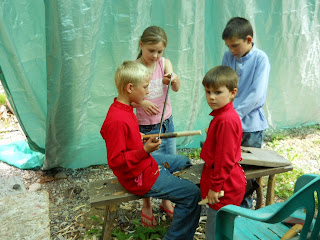 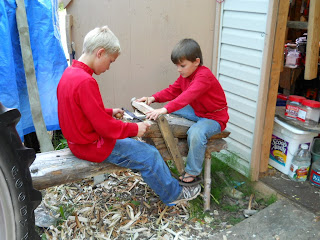 That is my shaving horse, obviously adult-sized, so the kids are double-teamed on it. Note the mini drawknife. I bought it partly for me, but mostly for the kids; it is very useful. However, the experts use the adult tools: 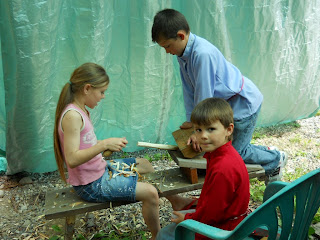 Good grief! Neoni in a short skirt? O tempora, o mores! What is the village coming to? But also note the double teamed hold-down.

After a few hours, something like a dozen kids will wear me down. But only one band-aid was required. Neoni disregarded my instructions and grabbed the drawknife by the edge. I think it was a cheap lesson in safety, and a good time was had by all.
Posted by JRC at 6:21 PM
Labels: Green woodworking, kids, shaving