Until about three days ago, a high pressure area was firmly entrenched over south-central Alaska, where I live. Although sunny, temperatures plummeted; somewhere around Sunday the pressure on my barometer was 1042 millibars and the temperature -38.4C, close to the wimp-out limit on my digital thermometers (-39.8), and in this weather I decided to go for a walk. I can't ski at those temperatures, the cold freezes both hands and feet. However, at least one moose was undeterred by the temperature. 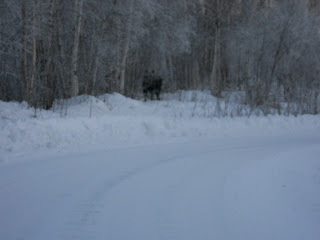 The moose is the slightly darker blob center. I confess to a lousy picture. The camera was in close-up mode. A grave mistake. Change modes inside, before you go out. I had stored camera inside the many layers of clothing I wore (more later) and getting it out is a production, which also freezes your hands because you may be very deft, but I defy you to operate a camera wearing US Army surplus Arctic mittens. You can't wear the cam outside your clothing because the batteries will drop dead in about three minutes.

Anyway, with my hands frozen I went as far as I could, but my hands are a weak point and I started back. On the way, there was Little Lonely Lake. 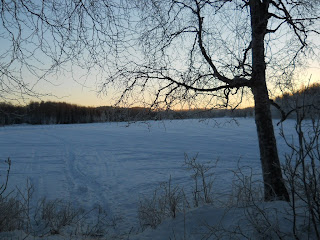 I am looking mostly East at this point; notice that although it is past 10AM the sun is very coy about exposing itself. Notice also the enormous number of Satan Sled, er, Snow Machine tracks on the lake. They make skiing very difficult. I have to stick to the edge of the lake; the blasted things like to take up the middle. And just about the whole lake.

I survived the experience in good shape, my hands warmed back up. So, perhaps you wonder, what does the hardy Alaska Sourdough wear at -38C? I assure you it will not make the pages of Gentleman's Quarterly. 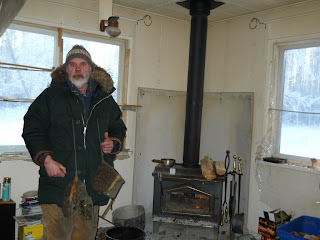 This is, of course, a posed shot with the camera on a tripod. In Alaska you dress in layers. Long underwear, polypro for choice. Never wear cotton in cold weather. It gets sweaty and freezes. I have several weights of polypro, but will not post embarassing pictures in the blog. But today's was medium (I have some really heavy artillery in reserve). Wool shirt. Padded Carhartt's overalls. Fleecy heavyweight vest by Lowe's; I live in it in winter. Overall my Alyeska down parka, marvellous garment with a fur collar, acquired on the cheap at a spring sale at a thrift store. Knitted cap on head, pull the hood over it. Not shown (cut off by the camera) are the essential bunny boots. This is an improbable footgear made, it seems, out of rubber for the US Army. I had a long conversation, recounted elsewhere in this blog, with a Yorkshireman named Tom, who told me all about bunny boots. First, buy the white ones, not the black ones. Second, try to get the ones with the manufacturer's name (Bata) on them. They go for about $70 these days, but I found a pair for $9 at the Salvation Army! They are miraculous. They are very comfortable besides. They work like a Thermos bottle -- multiple layers with air between.

So there you have it. Today, the barometer down to about 1020 (and falling) and it is cloudy. Light (very light) snow outside. Snowstorm coming up the Cook inlet. I might miss us; then again, it might not. Welcome to Alaska in winter.
Posted by JRC at 7:19 PM
Labels: cold, logging in winter, Moose, scenics