My Snow's all Wet

We had a winter storm around 30 December. It was quite heavy, about 30cm. So I went out to blow it, and thereby hangs this tale. I have about 200 meters of driveway to blow clear. Actually more, there is the "new" driveway and the "old" driveway. The old driveway was the original for the house. According to the surveyor when the house was sold, the old driveway was not on the property; the poor sellers had to have a new one put in. Maybe 250 meters. Usually an hour and a half does it.

The 31st I went out to blow it all away with trusty Horatio Snowblower, but it blew me away instead. The snowblower kept riding up on a mound of snow it would push up in front of it. Back up and try again. At the end of an hour and a half I had all of 20 meters done. Woe! (and also alas!) What is the problem?

After some examination of the data, in my best Sherlock Holmes manner, I saw what the problem was. The snow was the wettest bunch of snow I have yet seen. It came down at a temperature above freezing. Bad news. A snowblower (mine, anyway) has a snoot, as I call it. Inside this snoot runs an auger. It is in fact an Archimidean screw. Its function is to stuff the snow down the machine's gullet. It revolves rather slowly. Inside the gullet sits a sort of fan -- a centrifugal blower. The blower revolves quickly and blows the snow out of the gullet and up the exhaust chute. What was happening was that the wet snow clogged the auger; no snow in the gullet. No snow blow for you, Charlie.

Well, I reasoned that the temperature would fall overnight. If it got below freezing the snow would cease to clog the auger. So next day, it was -5C. The water will turn to ice. Or some of it will. And indeed ... 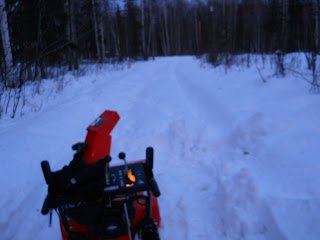 Horatio has actually blown out the old driveway, about 75 meters. If it were only my driveway I'd be done. Alas (again), there is "North Basargin Circle" ahead of me. This is no circle, and why it is North I have no idea because that's the way I'm headed. It is not on my property. The beneficient State of Alaska and the beneficient Mat-Su borough do not clear it, arguing that NBC is a "private" road. You can always trust a bureaucrat -- to do you in.

Cleaning this stuff out made me evolve a procedure. You must make one full-width cut (above). I call this the "bull cut" because there is no alternative, you just bull through. Bull until the wheels spin, back up, bull again, ad nauseam. Don't forget, lift up the snoot when you back up. It is heavy. Tough. 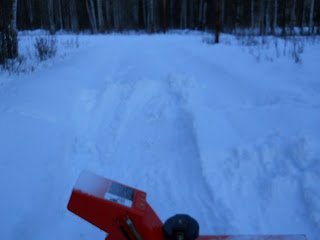 After you have made the bull cut, you can take half-width cuts of the rest. There is now traction for the wheels. The snow will blow. It works, but it is slow. I spent five days clearing this mess out. Probably chains on the wheels will help. Got to get some.

I got into a kind of trance. Bull. Half widths. Another bull. I did three hours that day and ran the mower out of gas. Back again tomorrow ( and the fourth day). On the fourth day Horatio got through! Below, we are at the road; I could now get out with the car if I had to. 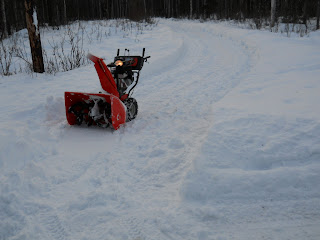 Behind Horatio is NBC, now clear. I am now on Basargin Road, not to be confused with North Basargin Circle. The outside, especially the grocery store beckons. But there remained "the turnout," a piece of driveway that allows me to turn a circle. No room to back up here. I got it on the fifth day and finally I could get out.

It is all exhausting. Horatio weighs at least 200 Kilos -- I can't pick him up. Just as well, mass is traction. But you have to steer him. And push him to get that last meter. And lift the snoot. And I'm not through yet. I have the New driveway to do. Maybe tomorrow. Once I could get out, I took a couple days off to go skiing. Snow OK, crusty but skiable. Temperatures down to -19C so I don't think I'll have wet snow. But there is the crust. We'll see.

Lysander the tractor might have done it, with chains. But my V-plow is definitely limited in deep snow. Tractor chains are expensive. So we stick with Horatio for this winter. If I could find a bulldozer-type blade that would fit Lysander, that might do it. Thing is, Lysander was built in 1947. Implements hard to find anymore. Meanwhile, Horatio will probably get chains too. Much cheaper than tractor chains. The perils of living in the Alaskan bush.
Posted by JRC at 6:26 PM
Labels: snow, Snowthrower Horatio