A Nacimiento in Venezuela is what is called a creche in English. It is a representation of the Nativity scene. The mother, father, son, and of course the three Kings and as many animals as you can pack in there. In my younger days, Christmas trees were practically unknown, and Nacimientos were the order of the day. Some stores, I seem to remember the now-defunct Almacén Inglés, had enormous window displays including model railroads. Not an accurate historical representation, perhaps, but lots of fun to see. Nowadays, the ubiquitous Christmas Tree has largely supplanted them, much to the dismay of traditionalists.

Anyhow, I know someone who ought to like a Nacimiento. So a year ago now I set out to build one. The first order of business is to carve the figures. The hardest one was the infant Jesus. This is because infants are very small! I could just suggest the features. There is one King, or Magus, in the group. His crown gave me fits. Again, small is difficult. Here's another King under construction: 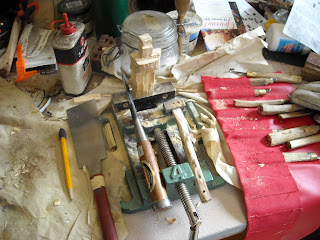 The saw work is done, King has been roughed out. Now the knife work begins. Also gouges. Both knife and gouges were made by me; microforging is the label to search for.

Then we had to make the manger. Now this is the subject of another post. I passed it off as a model of next summer's woodshed, which is true. I would have given the show away for sure if I had labeled it for what it is! So the manger then looked like this: 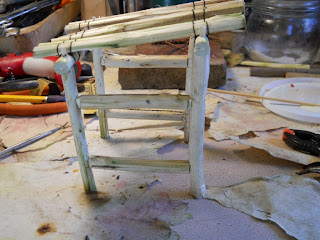 I am in the process of thatching the roof, using real straw from the oats I grew last summer. A bit out of scale. The joints on the manger are all genuine (but unpegged) mortise and tenon; not a single fastener in the whole thing. I made the joints tight so as not to peg them. Making 1 mm pegs was just too difficult. And at last, the completed manger: 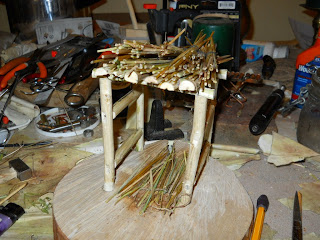 I have comandeered a slice of log for a base. I try to make some of these when I have the chain saw at hand. And at long last it is done. 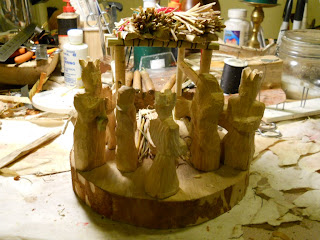 Remains to put it in a box and ship it off. There is a donkey colt and a calf in there, but hard to see in the picture. The ass and the ox bit would take up too much real estate. Thus art compromises with reality.

The Nacimiento was well received. It was a long-running project, a year or so in the making. But worth the effort. I am a much better carver now than I was when I started it!
Posted by JRC at 6:53 PM
Labels: carving, figures, miniatures, nacimiento