The Crafts Tableau, Episode I

As you must know by now, I am very fond of making Tableaux. They are sort of 3-D paintings, of vaguely Tyrolean or Bavarian character, rough-hewn -- what's the right word? dioramas, perhaps. So after more than a year's effort, I present the Crafts Tableau. 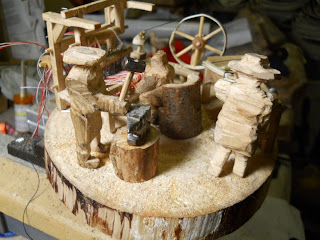 There are three characters in the tableau. There was no room for more; one of my self-imposed rules is that it all has to fit on one slice of log. In Front is Smith. He is, of course, hammering on an anvil. The anvil is the tip of a discarded Alaska Railroad spike, filed to shape. His hammer is a piece of scrap also filed to shape. To his right, back turned to you, is Woodworker. More later. In the back is Weaver. She is seated on her rustic chair in front of Nanoloom, which almost was Waterloo for this project. To her right is the spinning wheel.

Since Woodworker's back is turned to you, another view may be helpful. 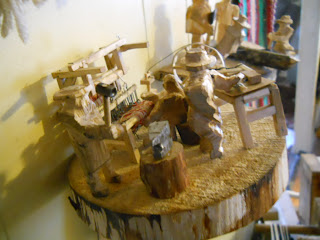 Woodworker has a functional workbench, but alas no vise. He has a chisel, a frame saw, and a plane. These tools are about 10mm long, the saw (a frame saw) with a piece of broken fretsaw blade. All actually work. You need tweezers to operate them, but the chisel chisels, for example. At this scale, I occasionally had to cheat. So I fastened the frame saw blade to the frame with super-glue. Likewise, Smith's anvil is held to its stump by trusty super-glue. The figures behind the crafts tableau are the Woodland Tableau, which I posted about a year ago. How time flies!

The real difficulty in this tableau was the loom. It was difficult -- extremely difficult -- because I wanted a working loom. The NanoLoom deserves a post all to itself and it will get one. I will add that with extreme pains I got it working, more or less. I wove three rows. The spinning wheel was easy, but I did not insist that it work. The actual spinner is a wire ohh maybe 0.05mm diameter, a few thou for RGU fans. Too hard to get it to spin.

So finally the crafts tableau is up on my wall. It had its ups and its downs, literally. It spent summer up on my drying rack above the oil furnace. And then I bumped into it on a dark and stormy night, and down it went. Mostly, everything survived the encounter with Mr Newton's gravity, but the loom got its threads tangled beyond repair. More next post.
Posted by JRC at 7:52 PM
Labels: Crafts tableau, tableau