When I make my tableaux, one piece of the tableau takes on a life of its own, and winds up taking more time than the rest of it put together. In the case of the Crafts Tableau, for instance, the loom took forever. In our Music Tableau, the long path went right through the organ. The sketch in the last post shows an organist and a crude organ. OK, let's make an organ. The organ was a whole bunch of subassemblies glued together as we went. I began with a keyboard. 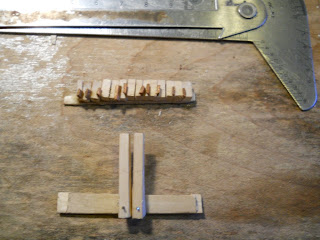 Keyboards on organs are called manuals. This manual was put rogether by cutting out individual keys and gluing together. This is the hard way to do a keyboard. The sharps were cut out of contrasting wood and glued on, with great difficulty and tweezers. The thing below the keyboard is the beginning of the pedal assembly, because all self-respecting organs have pedals. I did not do sharps for the pedals. Too much like work. I have pinned the pedals in, no glue yet, bacause pedals splay out and I needed to adjust all the keys later.

The next step was to make another manual. Again, all self-respecting organs have at least two manuals. This manual I made by cutting slots in a solid piece of birch. Much easier! Gluing on the sharps was just as difficult, though. Here we are gluing together the two manuals and the pedals to the sides of the case. There are tiny slots cut into the case to take the tenons on pedals and manuals. I refuse to use glue by itself, got to have a proper joint. But what is a pipe organ without pipes? So I started in on those. 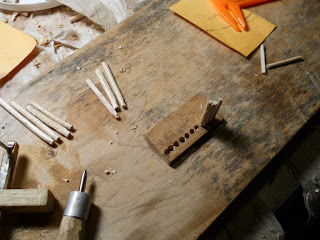 Here is a rectangular piece of wood, the "windchest" it is called, that holds up the pipes. This rank of pipes is lilac, passed through my trusty drawplate. The pipes are "scaled," that is they get thinner as they get shorter. Drilling the holes is painful; you can't make them all the same size. As you can see, I blew the last hole on the right of the picture. I rescued it with plastic wood (oh, the shame, the horror of it all!) and kept on going. Then I made another rank of pipes, square-section. Quite legitimate, square sections. Many pipes are made that way in real organs. 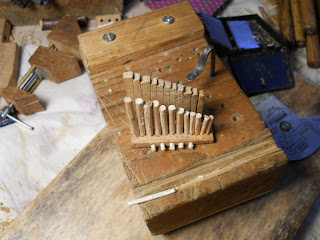 I have also put on tiny pieces of lilac for stop knobs. Hmm, short pipes in front rank a bit askew. Well, "history of the piece." And so we come to the current state of the organ: 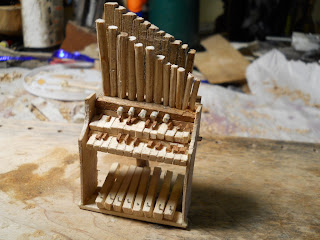 I like it. A bit rustic, as it should be. It is very small, and great detail at this scale is impossible, for me, anyway. Organ is 45 mm wide. And I see some of the sharps have become unglued. One more shot, taken an hour ago: 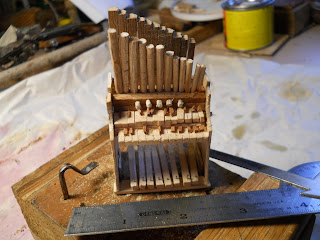 Case completed. Yes, it will definitely fit the Tyrolean aspect of the tableau. Now all I have to do is carve the organist!
Posted by JRC at 6:47 PM
Labels: miniatures, music tableau, Organ, tableau