After I did my last post, I reflected that the video I recommended goes by at warp factor five. Very fast. So I have decided to go step by step. This is my second practice molding. So we start with a scrap piece of wood left over from John's projects. We clamp it in the vise, and draw a picture on the end of the sort of molding we want. I have made this one up from scratch, but it sort of resembles the molding I cut in the previous post. 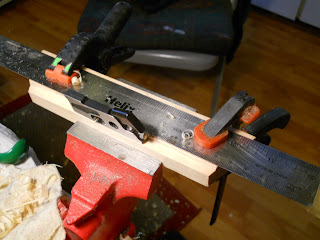 Now before you do anything else, flip the piece over in the vise and in the bottom of the piece, cut a rabbet. The purpose of the rabbet is to hold your painting. Here I am using the micro Veritas rabbet plane to do so. It cuts about a 6mm rabbet. About right. I have clamped a steel ruler onto the scrap piece of wood, AKA "stock" to guide the rabbet plane. If you don't do this your plane will wander. You will be upset. You will ruin your piece. Something thicker than a steel ruler would be better, because it will force you to hold the plane square to the work. I will call the tiny plane Peanut in what follows. When you plane a rabbet this small you spend as much time clearing shavings as you do planing. They clog up the tiny hole in the plane. But you do it. Now flip the piece over. 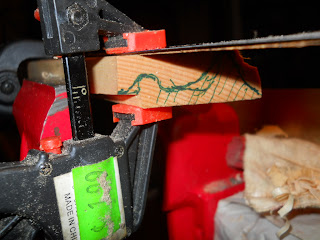 You can see the rabbet or rebate you have just cut, underneath at left. Now what we want to do is rough out the profile with rabbet planes. A rabbet plane cuts far faster than a shaped plane. A plow plane would cut even better. But this piece is about 20 cm long and the plow will not track properly. If I can, I use Big Daddy. This is the macro sized Veritas rabbet plane. He cuts big time. A joy to use. And he does not clog up. 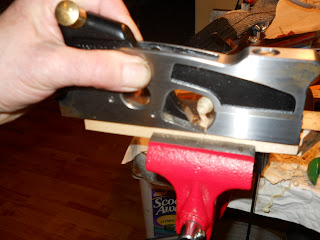 Now, what are we trying to do? We have a continous curve in the profile. We obviously have to remove some wood to get there. Differing amounts of wood, depending on where you are in the profile. So we are trying to approximate the curve by staircase steps. Engineers call this a step function approximation. So I cut rabbets, guided by fences, until I come to the point where I cannot clamp the fence any more -- too irregular a profile. Forget about cutting rabbets freehand. Superman can do it. Most of us can't. At this point our molding looks like this: 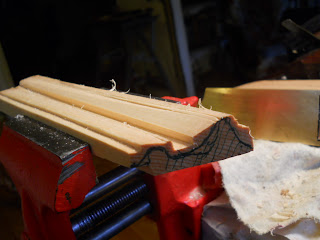 I cheated a bit and used a flat plane (violin maker's plane in fact) to get a slope in the part to the right. But you can see the stair steps. Now we are ready to hollow out the big curve at the right. Break out your hollower. 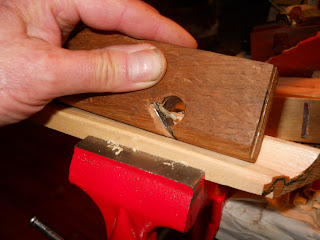 Now plane out the hollow. Do not be too fanatic about your drawn profile. Your hollower has a fixed radius (10mm in my case) and your eyeball had another. Look at the thing. Does it look okay? Stop. Do not be afraid to hold the hollower at an angle, as I am doing in the above pic. Sometimes it cuts better that way. I have a lot to learn still. The rabbets you cut guided the hollower. Superman excepted, you need a guide for a shaped plane; the rabbet (or groove) provides it. So you cut straight and do not wander.

We have dug a lovely curved trench in our profile. Here it is: 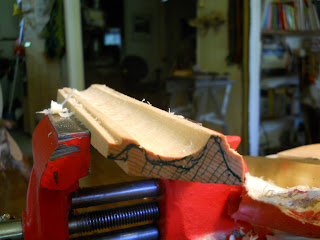 It does not quite match the drawn profile. Of course it doesen't! One drew the profile by eye. The hollower has a fixed 10 mm radius. Miracle if they matched. Do not be concerned too much by this mismatch. It still looks nice and that's what matters. Now let's do something about the hills, having done the valleys. We break out the rounder plane. This has exactly the opposite curvature as the hollowers. All I have at this point is 10mm radius. The rounder looks identical to the hollower. (except for the bottom). It is a bear to sharpen. After I applied it I had something like this.

Needs some more work but is recognizable as a molding or picture frame. It was at this point that I realized that this business is just like carving. You are limited in carving by the sweep of your gouges, i.e. curvature. You are limited in in moldings by the radius of your plane. Sigh. It looks like I am into a whole new era of plane-making. Need some much narrower radiuses, say 5mm. To start. If I were in 14th century Florence I would have gone to Giuseppe the plane-maker and ordered up a bunch of radii. The bill, no doubt, would have been paid by Cosimo de Medici, who wanted some frames for his pictures. But here I am in Alaska, got to do the whole megilla myself. Cosimo de Medici nowhere in sight.

I did a bit of cheating and applied a violin-maker's plane (commercial) to the thing and got a perfectly decent molding. We are not there yet, but we make progress.