The raising of the snow splitter, part I

In the winter, snow accumulates on the Chalupy roof. Eventually it warms up and slides off. Some of it lands right in front of the front door, and then we have the glacier. It takes an ice axe and a lot of shoveling to clear it. So last winter we decided to build a snow splitter. This is simply a roof with a peak over the porch. The snow will be diverted and we will not have to shovel out half a meter of snow, and of course that snow has compacted and is very hard to shovel. Now I decided to use commercial lumber and hardware for this thing. I am in a rush to get it completed; winter comes all too soon.

Now the first job is to do some concrete piers to hold up the 4x4s that are the major part of the structure. So the dimensions are known, about a meter thirty for the width and three meters long. So we placed stakes at the corners. 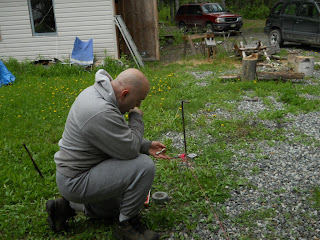 In retrospect we should have used batter boards. Fortunately John has a very good eye, so our errors, while annoying, were not fatal. Then John dug a hole at each corner. We have but three corners to do; one post already in place. I hauled out my forms, which I had built when I saved the porch from collapse a couple years ago. 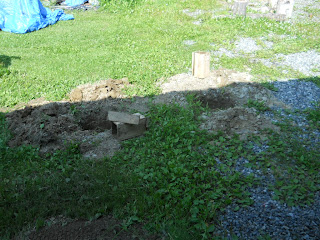 Here are the holes and the forms. Be sure to coat the forms with your used motor oil, on the inside of course. This makes it possible or at least easier to separate the forms after you've poured. The forms, obviously, go into the holes. 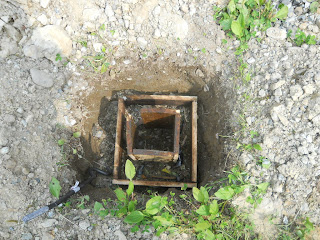 But wait. It isn't that simple. You have to attach an upright to the pier. In my porch rescue I just jammed the upright to the top of the post, and shimmed it until the porch was somwhere near level. But here I can't do that. Hanger bolts to the rescue. A hanger bolt is a commercial device. It is threaded at the top, 5/8" diameter, about 18mm around. We will screw a hanger bracket to this. The bolt must be plumb. We held it in place by primitive means. 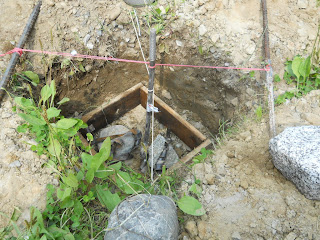 So I dumped a bunch of twisted steel strapping into the thing to act as reinnforcing. Need steel reinforcing for any concrete work. Go to Lowe's and get some premixed concrete. Add water and pour. It helps if the mix is just a tad soupy. 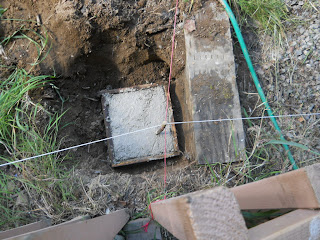 The bolt is not in the center of the form. Bad on us. Layout problems. Use batter boards next time. The bolt, by the way, is the reinforcing rod for the post. Now put the 4x4 form on top of this and pour again. 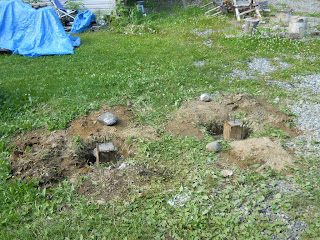 Now we can take off the forms. It requires a heavy hammer and a pry bar. But it can be done, especially if you oiled the form.

Now we screw hangers onto the bolts and drill holes in the posts to let the bolts clear. We can then raise the posts. Other hangers allow us to put in the cross-beams. So here's the structure as of today. 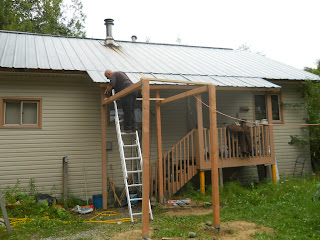 .Now we were interrupted many times by rain. Note all the steel hangers. This is much better than toenailing and saves time. We have the rafters to go. Very exciting. Never cut a rafter in my life. A race with winter as usual. Stay tuned for the next exciting episode.