The making of a gouge, Episode I

Warning. This is a how-I-do-it post. It is a tutorial on how to do something. If you are not interested in actual craft work, you can skip this post. I will not be in the least offended.

What I intend to do in this post (and in fact at least one more) is to show you how to make a small gouge out of a hacksaw blade. Now, why would you want to do this? Simple. When you are carving out curves, you need a gouge of the same curvature as the detail you need to carve. Real carvers call the curvature a "sweep." OK, I have some gouges, all made here, but none of them will handle the curvature in the current project. So it's time for a new gouge. It must be rather shallow. So I set out to make one. First, the setup. 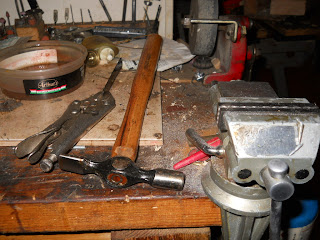 We have a pair of small vise-grips, a small hammer. It is a Warrenton pattern, a very useful pattern, because it has a flat head and a sort of chisel-like head, called a cross-peen. Also I have a a 50+ mm vise, (note the flat surface behind the vise; it's my anvil), a propane torch (invisible but off to the right; it's set up about 20 cm above workbench level) and a piece of tile on which to put red-hot objects. Do not set your workbench on fire! Now you need a piece of hacksaw blade. It does not need to be new, old and worn is just as good and really, really cheap. Like free. Our specimen is about 10 cm long. You can see it clamped in the vise-grips. Also in the picture, a plastic container with water in it. It is called a quench tub. It will reappear in Episode II, but ignore it for now.

So your first job is to anneal the hacksaw blade piece. This means, heat it up to carrot color. This will take all the spring out of it and that's just what you want. So hold it in the vise-grips, light off the propane torch and get the blade red hot. 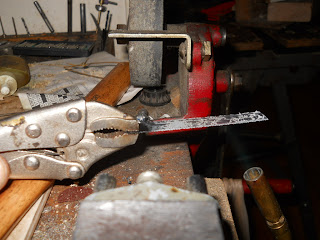 Orange hot is better, and yellow better still, but this is a very small piece of metal and your heat source is very concentrated, and only about 600C. So you compromise. Heat it up, "red" hot will do, about two cm at a time. Then let the whole thing cool. After you have done so, it is time to grind off the teeth on the hacksaw blade. 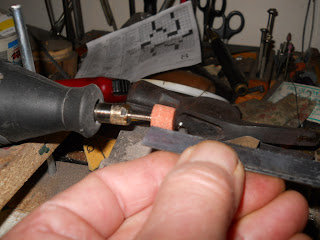 As you can see, I use a Dremel-Type Tool (DTT) with a grinding wheel mounted. The DTT is held in a home-made stand. You could of course use a bench grinder. Or even a belt sander. Or a file. Whatever you do, get those teeth off! Otherwise your masterpiece will crack. Just where you don't want it to; Murphy is hovering over your shoulder as you do this.

Now we come to the fun part. We have to shape this animal. The front part of the blade must be shaped to a rather shallow curvature. What radius? Depends on the carving. This is up to you. The rear part must be completely folded in two, just as you would fold a sheet of paper in two. The folded part will be the shank of the gouge. Anyways, I have to start a curve in the work. My current method is to use a small machinist's V-block. 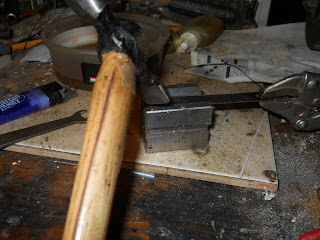 A bona fide blacksmith would use a swage for this. But I do not pretend to be a real blacksmith, just an artisan in search of a gouge. Now the above is a posed picture (I only have two hands). It illustrates the process, though. In practice I clamp the V-block in the vise. I heat the gouge boiled-carrot orange. This color will recur so often that I will abbreviate it as BCO. Quick as you can, transfer your gouge to the V-block and tap with the cross-peen of the hammer. Right in the middle. You will thus put a curve into your piece. It will take more than one "heat" to do this. The piece will cool off in about ten seconds. No mass, you see. You don't have much time to tap it before it is cool. So you do the whole length of your piece this way. Once I have started the curvature, I resort to long-nose pliers and start squeezing. 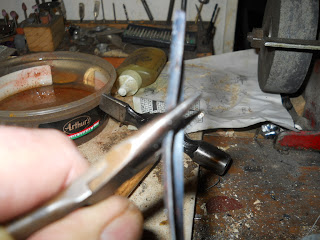 The object is to fold the upper part of the blade in two. It is the shank of the tool. Do not worry if it is warped at this point; just get it folded. Heat to BCO as often as you have to. Squeeze it! Also do not worry if it is twisted, bowed, or otherwise distorted. We can fix all that later. Just get the blasted thing folded. Then straighten it out. Here's what we're aiming at: 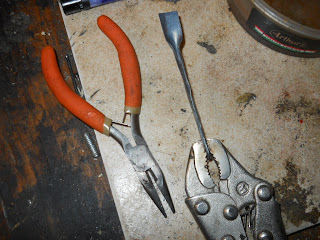 In order to do this I had to unwarp, unbow, and flatten. For this, it's heat it up to BCO, pound it on the anvil, heat it up to BCO again, use the pliers to unwarp it, ... and so on. It will take quite a number of heats. I cannot predict which way steel will warp and neither can anyone else. We have no complicated machinery at our disposal. But by George (II? III... VI?) we have a gouge blank, with a bit of work. I am into something like an hour and a half worth of work at this point; YMMV.

At this point the gouge might work on soft butter. It's almost time to heat-treat it. This will be the second episode in this drama. But before we do that I find it convenient to put a preliminary grind on the edge. At one time I did this with the Dremel-Type tool. No longer. Once I built the angulometer (see a previous post) I do it on my wet grinder, or TSO (Tormek-Shaped Object). 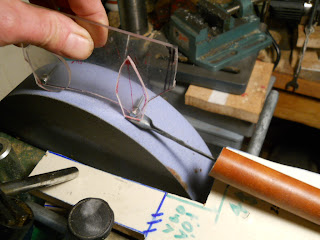 Now, gouges, chisels, and plane blades need a 25 deg angle. What I have done here is improvised a handle for the tool. Not, to be sure, the final handle. I am using this in a homemade jig to set the angle to 25 deg, aided by my angulometer. I grind up the first approximation to a 25 deg bevel. Next, I have to heat-treat this tool. But that will have to wait; this post is already too long. I really, really recommend wet grinders. They do not ruin tools, which a dry grinder will do at the drop of a hat.

One last item. When you sharpen a gouge on a grinder, you must rotate it. You can't just let the grinder go by itself -- that would put a flat in your gouge. So you gently rotate the gouge as the wheel turns. That way you get a nice even grind.

Enough! See Episode II for more. Coming soon at a blog near you.