In the last episode, we had made a screw. Now we have to make a nut, in the greek manner. According to Hero, the greeks split the nut -- but I am getting ahead of my narrative. The nut should be bored to the inside diameter of the thread. Let me see, 16mm outside (OD), 2 mm depth of thread, so that's 14mm. I do not own a 14mm drill, so the first job was to bore the 14 mm hole on the Taig. 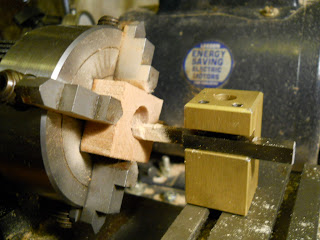 You may say this is cheating. Use of power tools! But if I hadn't done it I would still be waiting for the 14mm bit to arrive in the mail. Boring is a very accurate way to get a given diameter hole. You put a boring bar in the tool post, and you can adjust it to the nearest thou -- .001" or .025mm. The nut is held in the 4-jaw chuck. OK, we have a nut blank. The greeks then split the nut in half. They rubbed lampblack on the crest of the bolt, and then made an impression on the nut. Fortunately my kerosene lanterns needed cleaning, so I had an ample supply of lampblack. 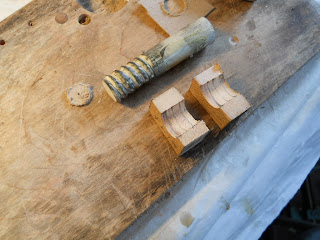 Because the nut is 14mm and the OD is 16, we can't get an impression anywhere except the edges. But that's OK, we can pencil in the threads. Now we have to chisel out the valleys in the nut. This proved to be very difficult. It's all end grain, notoriously difficult to chisel. I was reluctant to call mission control in Houston.
So I decided to take a break and look ahead to the next step, using a chase to cut threads. Using some old files, duly annealed, I filed up a pair of chases, one inside and one outside. For the inside one, I drew up a paper pattern, pasted it to the chase, and filed away. 4mm pitch, 2mm depth. For the outside chase I used the inside one as a pattern. 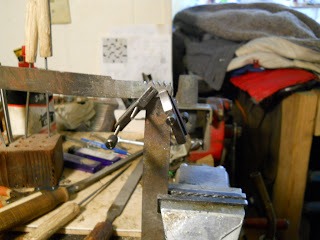 All my learned books recommend a much smaller pitch than 4mm. But it is very difficult to file say a 1mm pitch without a microscope and a set of very small files -- actually, I have some; jeweller's files or swiss pattern files. Still difficult. The old file, horizontal in the picture, is the inside chase. It is used to cut the inside thread, as in a nut. The vertical old file is the outside chase. Now, chasing is in the future, but as it turns out, the inside chase came in handy.

I finally broke down and called mission control. Houston said "use your burins, dummy! Out." Oh. Thank you, Houston. Last year I was experimenting with carving stuff on endgrain, and I made two or three burins for the purpose. A burin is just a very narrow chisel with a lozenge edge, used to cut endgrain! Brilliant, Houston. So I dug out the burins and used one to cut the beginning of the thread. Once the thread was established I could use the inside chase to widen the grooves. 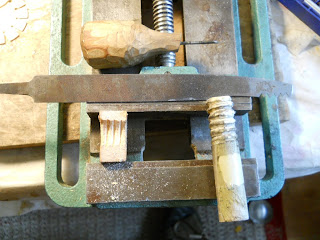 In the still life above, the burin at the top and the chase next to it. You can see the half-nut scooped out with the chase, and all we have to do is the other half of the nut. Once you get a good fit, you have to glue the hut halves together. I suppose the greeks used a band as well, since I very much doubt they had any Elmer's glue.

In another episode we will look into my adventures in chasing threads. This looks difficult, and it it is. But I have hopes. Stay tuned.
Posted by JRC at 6:31 PM
Labels: screw, screw by hand