The Taming of the Screw

After making the Doctor Buggy, I was at a loose end for a day or so. It may be March, but there is plenty of snow on the ground. I observe signs; for example the parking lots in Willow are melting. Liquid water seen! However, if you try walking out at my place you will be up to your knees in snow. Can't ski on it. Soo-- what to do next? The answer was provided by a Swedish blog -- all about slojd, a Swedish word, usually translated as "craft." In the blog, the cutting of threads is discussed. Now, cutting threads in wood is a fascinating subject. There are all sorts of ways to cut threads. This is because the lowly screw, available for pennies at the hardware store, is a supremely useful object. My idea is to try all of them, except for a screw-cutting lathe, which is rather expensive. Let's go back in time, as far as we can.

We start with the Greeks. As we all know, without olive oil the entire greek civilization would have never gotten out of caves. Modern Greece would come to a crashing halt as well, if deprived of good old olive oil. But to make OO, as well as wine, you need a press. The press is best operated by a screw, because, you see, a screw is an inclined plane wrapped around a cylinder. This gives you both mechanical advantage and control. Hero (of Alexandria), year 100 AD or so, described the screw-making process very well. And Bergeron, in his 18th Century Manuel du Tourneur, does the same thing. The Chinese, who seem to have invented almost everything, did not get around to the screw till the time of Bergeron. So how did the greeks (and I) make a screw with only primitive tools? Well, we start with a wooden cylinder and a piece of paper. 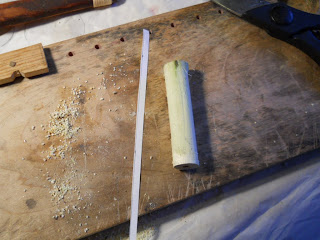 The wooden cylinder is a piece of lilac 16 mm diameter. The piece of paper has been cut 4 mm wide. This is the pitch I picked for my screw-to-be. The pitch of a screw is the distance the screw travels in one complete (360 degree) turn. I pulled 4mm out of a hat, but I was aware that if it was too much finer I would have trouble with the next step. And I used the Taig lathe to turn it down -- I can adjust the diameter down to better than 0.1mm in wood. But I could have done it on a pole lathe or used a rounder plane, so this is no big deal. If you try this at home, and have no lathe, go buy a dowel at the hardware store. For a first attempt 25mm would be better than my 16. When cutting paper I found that a knife and a steel ruler are much better than scissors.

OK, now wrap your piece of paper around the cylinder. Hold it down with tape. 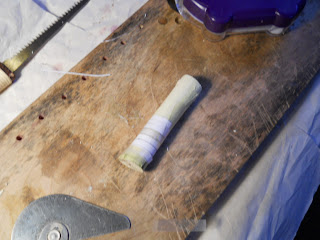 Since the ancients had neither paper nor tape, I conjecture that they used leather and thongs. Now this wrapping business is critical to the future of your screw. (A posteriori wisdom). If you leave gaps or if you wrap too tightly, the pitch will be irregular. Bad news. The ideal is to leave one saw width between the wraps, because the next step... 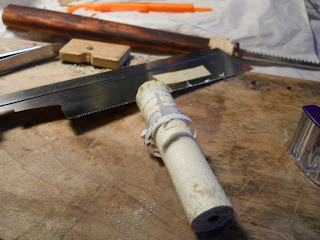 ...is to take the thinnest saw you have and cut down between the wraps. Above, I have put a piece of tape on my faithful miniature Dozuki to make the depth of cut. The tape has come adrift. Tape does not stick to wood very well. Masking tape works better than "scotch" tape. If we were careful, we have a spiral groove running down the cylinder. How deep? Well, that's another parameter in the screw business. I used a nominal 4mm which came down to about 2 mm when I got through. I will explore this aspect of screw lore anon.

Now, your saw cut is the valley, or the trough, of your thread. The middle of the unsawed portions is the peak, or ridge, of the thread. So you take the appropriate chisel and cut down from ridge to trough. In my 16 mm screw, I have to use a microforged miniature chisel. 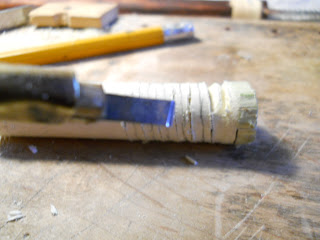 More after-the-fact wisdom: turn a stub (about the depth of thread) on the front of the screw. It holds the tape, and is a guide of how deep to chisel. This phase of screw cutting is not at all difficult, but it demands care and can get a bit tedious. At the end: 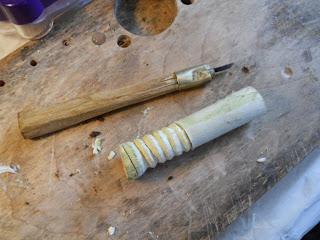 We have a respectable screw, if not a perfect one. This screw is a "demo" since I stopped to take pictures as I went. If this screw was for decorative purposes we'd be through. But it isn't. So the next stage is to make a nut for the thing to turn on. Making nuts the greek way is quite a production, so I will leave it for the next post. Again, if you were trying this at home, a larger diameter would be helpful. Not so much eyestrain, and small chisel errors don't hurt so much.

But I think that this screw-cutting business is fascinating. We have to look at chasing, taps and dies, screw-copiers, screw-cutting lathes, -- almost endless! Until next time, happy screw cutting.
Posted by JRC at 7:46 PM
Labels: screw, screw by hand