Stormy Weather and a moose

Yesterday we had the worst snowstorm of all the winter. In April, no less. It dumped 30 cm of snow, or one foot if you prefer, in the course of a day. The Weather Service was right on the ball (this time) and called it with ample warning. This morning I looked out my front porch. 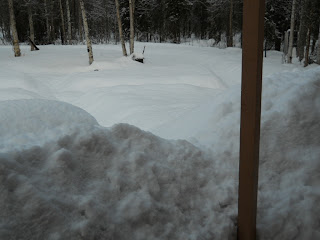 The mountains in the foreground are caused by snow sliding off the roof. When it does so it makes a noise very like an earthquake. Ouch -- but it is just snow. The snow is right up to the level of the porch railings. The temperature at the time of the picture (8 AM) was about 1C -- above freezing. So the snow is wet. Grrr. I went out and started my snowblow routine, and sure enough I had great difficulty. Wet snow is terrible. The machine, heavy though it is, can't get traction. I need chains for the snowblower. Sigh. I worked two hours, by which time I was exhausted and had done maybe 20 meters. Only 150 (?) to go. I must get the GPS out and measure my driveway. Tomorrow we will go again. Just like January. Such is life in the Alaskan bush. 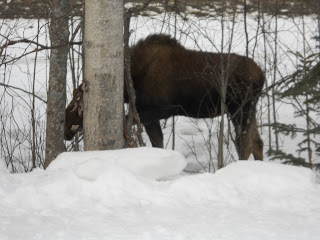 This guy -- I assume it's a guy because (a) it is very large and (b) it has no offspring in tow -- was munching near the airport, twenty meters from the Parks highway. I love moose. But don't get too close to them. They could get upset with you and tromp you to death. They weigh far more than us humans.
Posted by JRC at 6:42 PM
Labels: Moose, snow, Snowthrower, winter