Big wheels on a small lathe

No matter how large a lathe you have, sooner or later you will come up with something too bigto turn. When I went to module 0.9 on the clock, I calculated the size of the biggest wheel and found I could swing it (that is, get it on the lathe without colliding with the bed). So I said, let us go ahead and do this thing with module 0.9. The following picture is the 50 tooth gears made so far. None of them are stellar. So we foresee problems ahead. 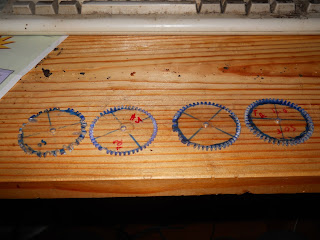 First thing was to cut the blanks out for the midsize wheels. I did this on the bandsaw. The first thing I did was to cut out masonite-type board slightly smaller than than the gear itself. When I put it on the lathe, it was very obvious that the regular toolpost was not going to reach to the rim and cut it. Impasse. Next morning I started designing a fixture that would move the toolpost -- and realized as I did I already had one, the compound slide. The Taig compound is very flimsy, so I usually don't use it unless I have to cut tapers. So up with the compound and success: 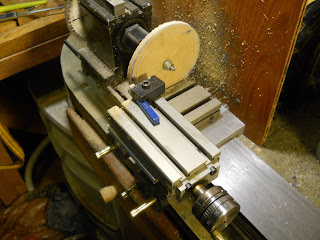 So the last problem was to make a new dividing head plate. I did this my usual way, with my PostScript program. I used my optical center punch. Then off to the drill press. Just to make sure everything was centered, I used a fixture. 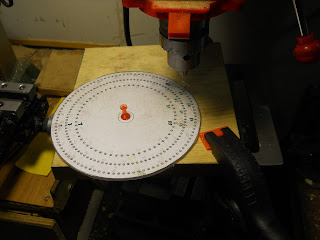 Then I put the dividing head back together and tried some more 50 tooth blanks.  None of them were stellar either. There is something wrong with the dividing head. But that will wait until the next episode.
Posted by JRC at 8:38 PM No comments:
Labels: IsaacsClock, Taig

Change of pace: this year's garden

One of the problems of living in suburbia is the lack of space to put in a garden. Another, for me, was the less than sterling health. But I seem to be unable to live without planting something. So this year, willy-nilly, I put a garden on the back porch. 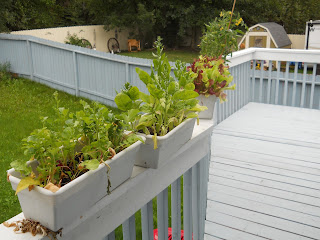 Front to back, we have radishes, spinach, mesclun (lettuce mix), red leaf lettuce and tomatoes. We have aready picked some of them and they are delicious. 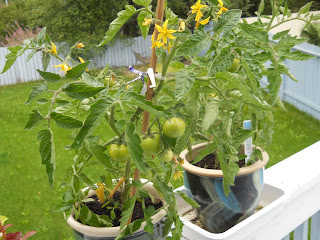 As you see the tomatoes are actually tomatoing. I am not sure they will ripen. But they are certainly happy, and that is what counts.

I suppose I am a farmer at heart.I like to grow things you can eat. Even if my farm is now the back porch, and wait til next year when I will get some more real estate. It is now container gardening time.

We will return to our regularly shceduled clockmaking drama in the next episode.