It has been been while since I posted. I have temporarily abandoned the cutting of the last wheel on the clock, and have been playing in the shop. I have been looking at laser centerfinders ever since I saw Dan Gelbart's video, number 18 in the fabrication series. Also Gadgetbuilder's pages have a simple laser centerfinder. Out I went to OfficeMax and bought a laser pointer.

All these gadgets have a frame holding a cheapie laser pointer, used by presenters. So we cut two slots in a piece of Aluminum. Had to do it in the lathe because the mill is busy. Bigger endmill makes it faster. A 3mm shank is superglued in. So I friction-fitted the laser in the drill press, made a pinhole in the paper taped to the drill table with the smallest drill I have, and tried this out. You must adjust the tilt so that the spot is centered over the pinhole. I found out (a) the laser spot is much too big. (b) Any adjustment you make does not stay put. Unacceptable. 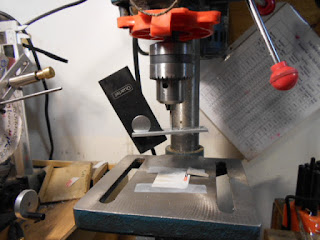 To cure the big spot I made a pinhole from a scrap of soda can. Tried the thing on the mill. Now the spot is just fine, the adjustment still unreliable. 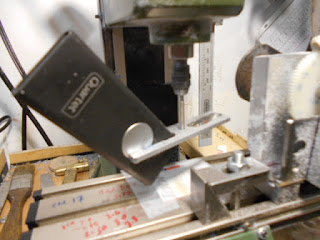 So we go off and make a frame with screws in it to hold the pointer still. At this point I took a fateful decision and cut dovetails to hold the frame together. It is very difficult to do such small dovetails with a jeweler's saw. 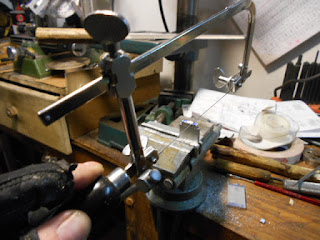 One day later and having remade one of the joints, I J-B welded the whole thing together. It worked. The pointer stays put. The peephole makes the spot very weak. You can just see the line I drew around the pinhole. Note the adjustment screws. There are three 4-40 screws, you can only see one. 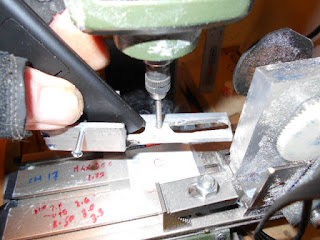 I now have a working centerfinder. So on to other things. I got interested in soda (or beer) can alcohol stoves. The Internet is full of articles and videos on how to build these things. Mine work. I used Red RTV to seal the cans, could use muffler tape I suppose. 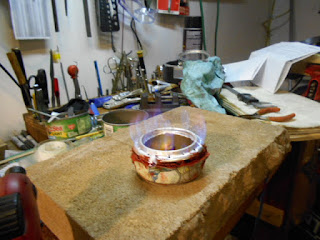