Squaring the circle, or lumber from logs

In Alaska, we have a paradox. While we are surrounded by trees, lumber is very expensive. This is because it is imported from the "lower 48," as we call the rest of the USA (except Hawaii). There is enough lumber -- spruce, anyway -- to go a long way, but for various political reasons, which I will not rant about now, it is unavailable; when it becomes available it is in some remote location. Okay, this is a challenge. I want a workbench for metalworking projects, so I decided to build one, from logs that grow on my property or I find lying around on the power line right-of-way , for instance. The wood of choice is birch, because it is a hard(ish) wood. If the scandinavians can build things out of birch, so can I. There is nothing but birch, spruce, alder, and aspen in this part of Alaska.

The traditional way to do this is by hewing the log. You outline the square you want on the end of the logs, snap chalk lines to indicate where you want to cut, saw down to the chalk line, and then chop (hew) out the stuff between the cuts. A picture may be in order: 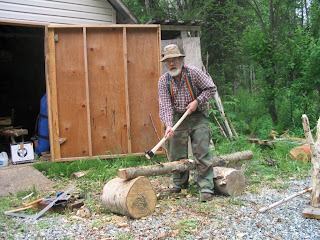 Here it is spring 2008, and I am hewing out the cuts I made with a saw. I am using an adze to do this. Some say a broadax ( a one-side-edged axe) is easier. But broadaxes are only made, as far as I know, in Sweden, where this kind of thing is considered an art form, and they are very pricey. Well, this makes quite a decent log, but it takes a long time! It is also tiring, me not being as young as I once was. So, when I finished that first log, I went to plan B. Let's see if we can do it with a chainsaw, freehand: 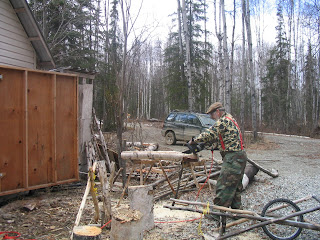 Above, I use an (electric) chainsaw to slab one of the crosspieces. This is much hairier than the adz, because a chainsaw is a dangerous tool, but it takes minutes. Does it work? Glad you asked. 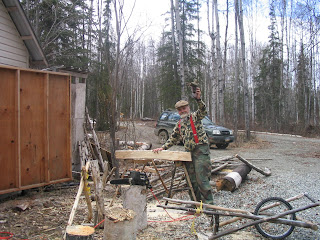 The surface leaves much to be desired, because the chain is a crosscut chain, and I am ripping -- going down the grain. (I have since acquired a gas chainsaw that has a very narrow bar, and it leaves a much better surface.)

Here is a finished crosspiece: 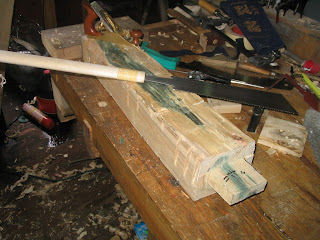 I happen to think that the picture above is a rather nice still life. By the way, the workbench in the picture came up with me from Juneau. I built it entirely out of found wood, at a cost of $8.00 US for fasteners (bolts to hold down the top. There are no screws, nails, or staples in that bench, and there will be none in the new bench).

The third option in lumbermaking is the heavy artillery option, but I'll leave that for another post.
Posted by JRC at 7:56 PM
Labels: chainsaw, logwork, suaring logs