I really have to keep up with the Joneses, er, blogsters. There are people who blog every day. I admire them, but I find this difficult. There are lots of things to do in a day. Future bloggers, please note: It is incredibly easy to create a blog. It is much harder to feed it. Well, when in a pinch, resort to scenery. I could have entitled this "The Four Seasons" a la Vivaldi, but that would be trite. Alaska has incredible scenery. For starters, here's dawn over Little Lonely Lake, 300 m walking from home: 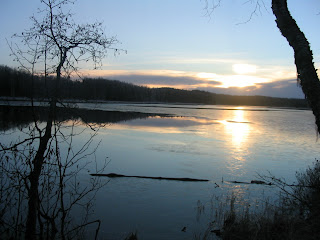 These dawn shots are always tricky, from a technical point of view. If you meter as in a snapshot, the built-in meter is ovewhelmed by the sun and you get a washed-out picture. Have to meter on a darker spot, freeze the exposure (button halfway down on a digital cam) and then compose and shoot without letting up on the button.

Next, a beaver and his lodge. 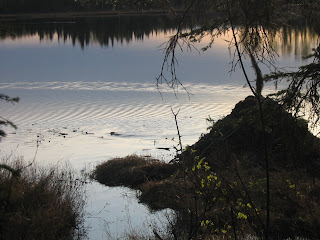 This is (forgive me) a shot of Igor, as I called him (it might be Ivana, though). Igor and Ivana built a lodge (foreground) and spent the winter there. They are no longer there, an unexplained Alaskan mystery. You can see Igor/Ivana about the middle of the picture. Here's another shot of the lodge: 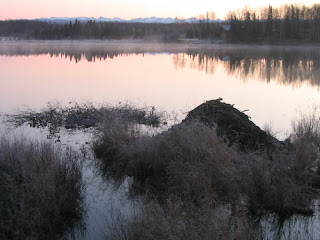 If you look carefully, you will see a float plane in the background. This is the quintessence of Alaska. Soon, the floats will be replaced by skis, or the plane stored for winter.

Wild life is not confined to beavers: 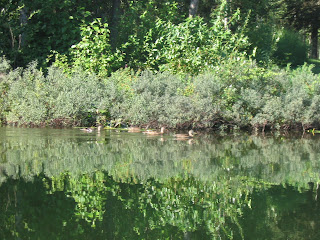 As you can see from the handsome ducks (on Little Lonely Lake) snapped here. There are days I want a 600mm tele. But the camera to mount it on would bankrupt me. Sigh.

There are lot of lakes whithin walking distance. Here is Crystal Lake: 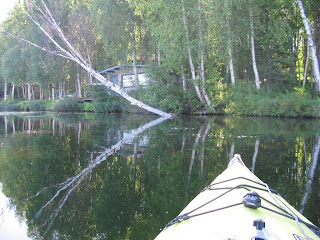 The Kayak is as quiet on the lake as the scenery. No fumes, no noise. On a lake, a few strokes of the paddle will do twenty meters. Ah, summer. But eventually the fall cometh: 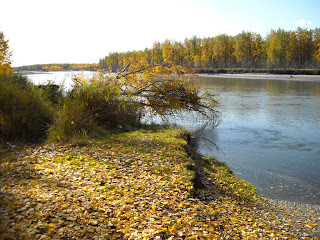 This is the Susitna river, which flows from the Susitna glacier. Geographically I live in the Matanuska-Susitna borough, which takes its name from the rivers which drain the glaciers with the same name. Got that? There will be a quiz at the end of the lecture. 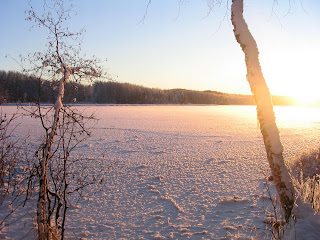 This is Little Lonely Lake in midwinter. There are lots of nice things about winter. For instance, I can get on the skis, go about 2 Km and I get a lovely view of Denali, weather gods cooperating: 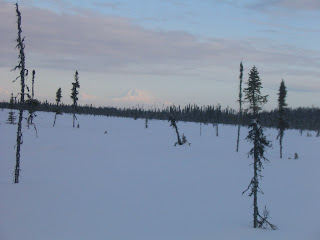 In the middle of the picture is Denali. Maps and Geography books call it "Mt. McKinley" but nobody else in Alaska does. It is 6194 meters -- the highest in North America. Since it rises almost from sea level, it has the highest sweep of any mountain, including Everest, because Everest rises from a --- ohhh call it 5000m level. Of course, when you get up to the 9000-meter level you have other problems besides the vertical, i.e. Oxygen lack. Denali is about 200 Km north of my house, according to the map.

And to conclude the scenic tour, here's Mount Susitna from almost exactly the same spot, on a different day: 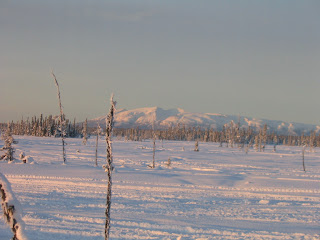 Mount Su is the anchor point, so to speak, of the Alaska Range, which delimits the Mat-Su valley from the west. On the East, a similar function is performed by the Talkeetna mountains, full of legendary pots of gold. Literally. People still extract gold from the Talkeetnas, and trespassers may not be persecuted, but they will probably be shot. By the way, the place where the last two pictures were taken is called the Willow Swamp. It is just about impassable in the summer, but in winter you can ski on it.

Alaska is truly wonderful, four seasons and all.
Posted by JRC at 6:29 PM
Labels: scenic