Not much to report today. The game has been postponed on account of rain. It has rained more in the last week than in the whole year, about 40mm. I have been quite housebound, because it is hard to do things in rain. When I look at the Weather Radar, which you can do yourself on the 'net, I am not encouraged: 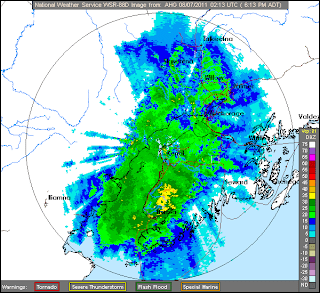 Of course, you may not be interested in the Kenai, AK weather radar. Google on "Weather Radar" to find a more applicable image. That's if you live in the USA. If you don't, perhaps there is an equivalent. But NEXRAD (as it is called) is much better than the TV forecast and very easy to interpret. I far prefer the "lite" image. It shows reflectivity and nothing else. Loads in a nanosecond. Fine by me. The higher the reflectivity the higher the water content. It is color-coded, so blue is heavy, green is worse and yellow is a disaster. So you see above an amoeba moving south to north across an area perhaps 1000 Km end-to-end. It will also go east-to-west a little. This is called geostrophic motion and I won't bore you with it. With a little practice at correlating what you see on the radar with what you see out your window, you can do much better than the TV weather. This is local forecasting, do it yourself. The TV weatherperson is not a complete idiot and often has relevant degrees -- but sometimes they don't seem to notice their own noses.

The kind of weather we are having is a consequence of the North Pacific Oscillation, or NPO. The weather cycle lasts 35-40 years. No one knows why. There was sun last evening and this morning. It did not last. It's raining again. And it did the same thing last year. The NPO seems to produce very dry springs, cold winters, and wet Augusts. Fall is always wet. A forty-year cycle is very difficult to dope out. Need far more data than we have.

Just for laughs I always read the official forecast, in impressive capital letters, produced by the National Weather Service. I have coined a term for some of their forecasts. It is a Mongo Forecast. This is a forecast for a planet called Mongo, very similar to our own but in some other universe. I will say that our forecast office (in Fairbanks) has a very difficult task. They are forecasting for an area Wasilla to Cantwell, about 300 miles - 500 Km or so. Much too big. So Mongo forecasts are quite common.

Well, I weeded the whole garden again. Could be worse.
Posted by JRC at 7:05 PM
Labels: rain, weather