A chisel is perhaps the easiest thing to sharpen by hand. A gouge is an entirely different animal. Gouges are sort of like a pipe split down the middle and sharpened on one end. Here is an example: 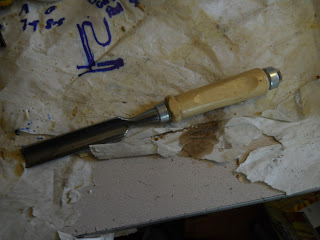 The static picture of a gouge being sharpened is exactly the same as a chisel being sharpened. But there is one important difference. If you were to hold the gouge in one position, the rounded bevel would be flattened! This is not good. The bevel must be a perfect round. So you have to rotate the gouge as you rub back and forth on the stone. You must of course hold the gouge flat on its bevel. But don't hold it there too long. Slowly rotate the gouge. If you do this, you will get a nice circular bevel.

The question arises as to how you get the bevel in the first place. Well, if you have just bought a gouge, stick with the original bevel until you have got the rotation bit down pat. However, all bevels are not created equal.

Basically there are three kinds of bevels. Carpenter's bevels , carver's bevels, and turner's bevels. A carpenter uses a gouge to remove wood in a hurry. Typical carpenter's bevel is about 32 degrees. I have encountered 45 degree bevels on some specimens. Now, a woodcarver would be lost without a gouge. At least 90% of wood-carving is done with gouges. Carver's gouges are shallower bevels, say 25-30 deg and maybe even less. This is because a carver has to renove wood very carefully. Else he/she does not get whatever cut is wanted. You can always make another cut. But you can't ever put it back on . Basic rule of wood and, for that matter, metal working.

Turner's bevels are are a sufficiently complicated question to warrant a separate post. The matter is complicated by the fact that most of the turners these days use power lathes. I do not. So all the lore about fingernail grinds -- about which more later -- may not really apply to foot-powerd lathe freaks, such as myself.

Synopsis: sharpen your gouge on a stone. Preserve the original bevel. Above all, constantly rotate the gouge.

One or two posts down the road, I will get into the subject of establishing a bevel in the first place.
Posted by JRC at 7:10 PM