The garden is icumen in

It is raining. We need to build an ark, not a snow splitter (about which more later).  And Google just changed their interface out from under me. I detest that. It makes life no more interesting. Is it any easier to blog? We shall see. I have been programming computers for longer than most Google programmers have been alive. I am not impressed by "novelty" any more. Novelty is a nuisance.

Anyway, fall is here. We had to get the garden in. We have already had the first frost; -2C on September 5 or so. Now intelectually I know that potatos will survive a frost. But I get edgy. The tops died. Potatos, as we all know, grow underground. So I got antsy. And I had this unusual extra labor force available. BOthe John and Fluffy are in residence. So it's off to dig potatoes
or potatoes, as the case may be. So John did, literally, the dirty work. First we have to dig the potatoes. On the whole I prefer potatoes. Strunk &White me if you will. 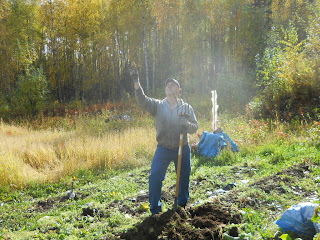 Anyway the rows have to be spaded. And I have but one row. John found it hard work. Agricultural manual labor is indeed hard work. Especially if you are used to machinery to do hard work! Then you grub around in the spaded ground to find the potatoes. Here is Fluffy helping me do the dirty work. 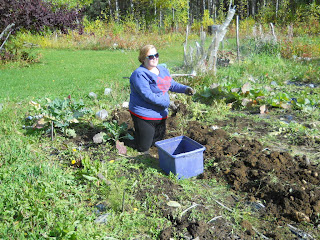 After that episode it was time to get the oats in. Now in less harsher climates, the oats would have been taken in long ago. This is Alaska, remember? We have have to do things earlier. In retrospect I should have gotten the oats into the ground earlier. But we learn by experience. The oats I got were raised (probably) in Saskatchewan. With all due respect to Saskatchewan, they have a milder climate than we do. Not too many people raise oats any more, especially in Alaska! So we scythed the oats. 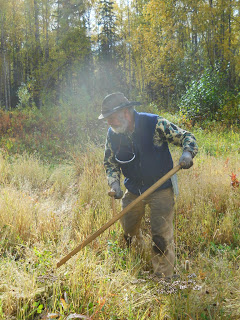 The scything was quite difficult. I should have peened the scythe (see previous posts on scythe). And John and Fluffy had their first go at the scythe.The ground was very wet; it has been raining a lot. The oats were not quite ready. But again, we learn from experience. I got antsy. Perhaps too soon. Now I have to thresh the things. Expect a post on the subject. The oats are now in the "barn" awaiting threshing. We are learning, after all. All the books are written for the lower 48 states. If only I could read Norwegian, Swedish, or Finnish I suspect would be better off, but unfortunately I do not have access to their literature.  I must go by what I have learned from books. Very, very few people grow their own oats; those that do live in the lower 48.

Anyway there is a payoff. Here it is. 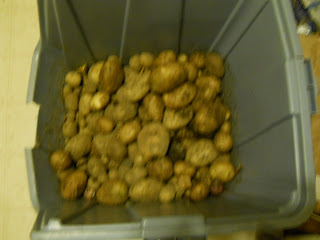 It does not appear in the image but it may be enough potatoes to last the winter. I apologize, Google. Your new improved streamlined interface is indeed better. Forgive my rant at the start of this post.