I own a Taig (q.g) microlathe. It is about 60mm center height and about 30 cm bed. It is enough for me right now, and it fits in a very small space. Now I am adding a feeedscrew (or leadscrew)  to it, following a detailed recipe at Dean Williams's page (look under leadscrew) out there on the web. A feedscrew is a long screw that allows you to traverse the carriage of the lathe by controlled amounts. Dean calls for a 1/4-20 left-handed thread; but I am using an ordinary hardware store threaded rod. Well, at some point the recipe calls for me to turn the threads off the rod. There came the rub. When I got the rod into the lathe the thing whipped around like an enraged Anaconda and bent the rod beyond repair. Now all machinists -- I am a very indifferent one -- know you can't turn long whippy stuff without a steady rest. A steady rest is just a set of fingers in a frame. Taig will sell you one, but I follow George Dyson's principle: never buy anything you can make, and never make anything you can find. Well, I did not think I'd find a Taig steady rest on my walks, so we begin the odyssey. 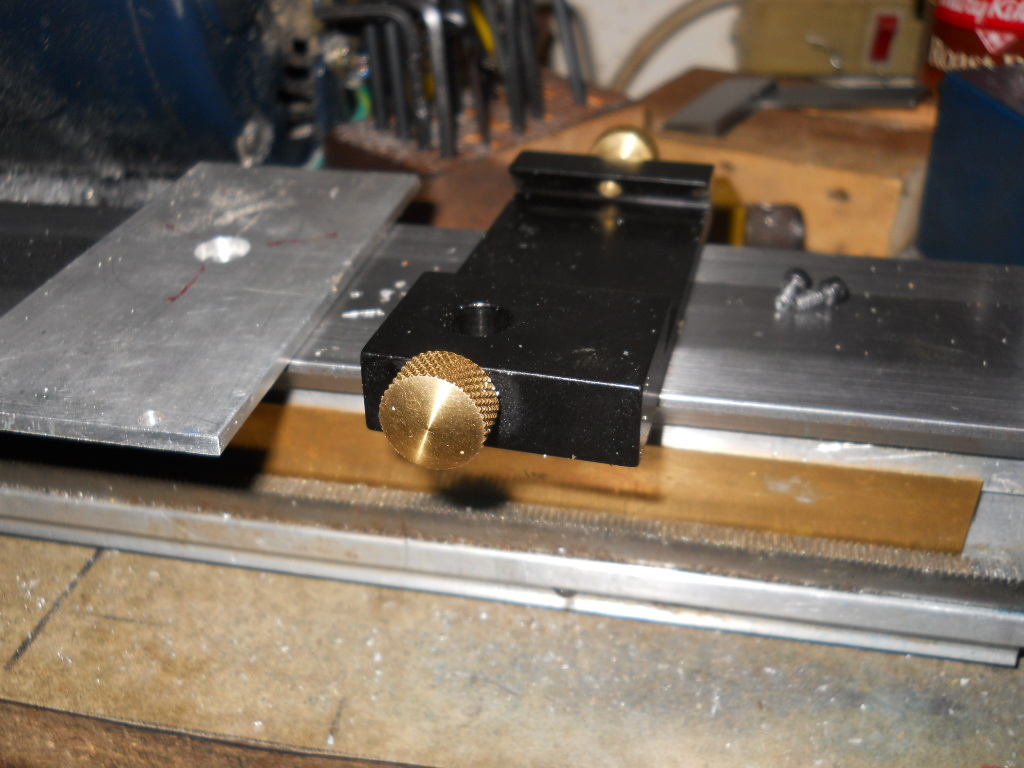 I happened to have the Taig wood-turning base and some wide flat (about 50mm) aluminum stuff, and that seved as a foundation. I drilled two holes for #4-40 screws in the aluminum flat, and then transferred them over to the wood-turning base. I drilled and tapped the base for 4-40 screws, a ticklish operation because it is very easy to break a 4-40 tap. It is about 3mm across. But I did it. I also drilled the biggest hole I could in the Al bar. 3/8 RGU. It will pass my feedscrew and that is what I want. Eventually I will drill it out larger, but for now it will do. The bar bolts on to the base with capscrews. If I want to turn wood I just have to unscrew them.

Now we have to make the fingers. Classic is brass. Don't have any in the right size. Use Al instead, something like 1/2x1/8  RGU hardware store stuff. Cut it with a hacksaw. Now we need slots in the fingers so we can adjust them to fit the work being turned.

I drilled a row of holes in the proto-finger. This leaves a whole bunch of metal as webs. 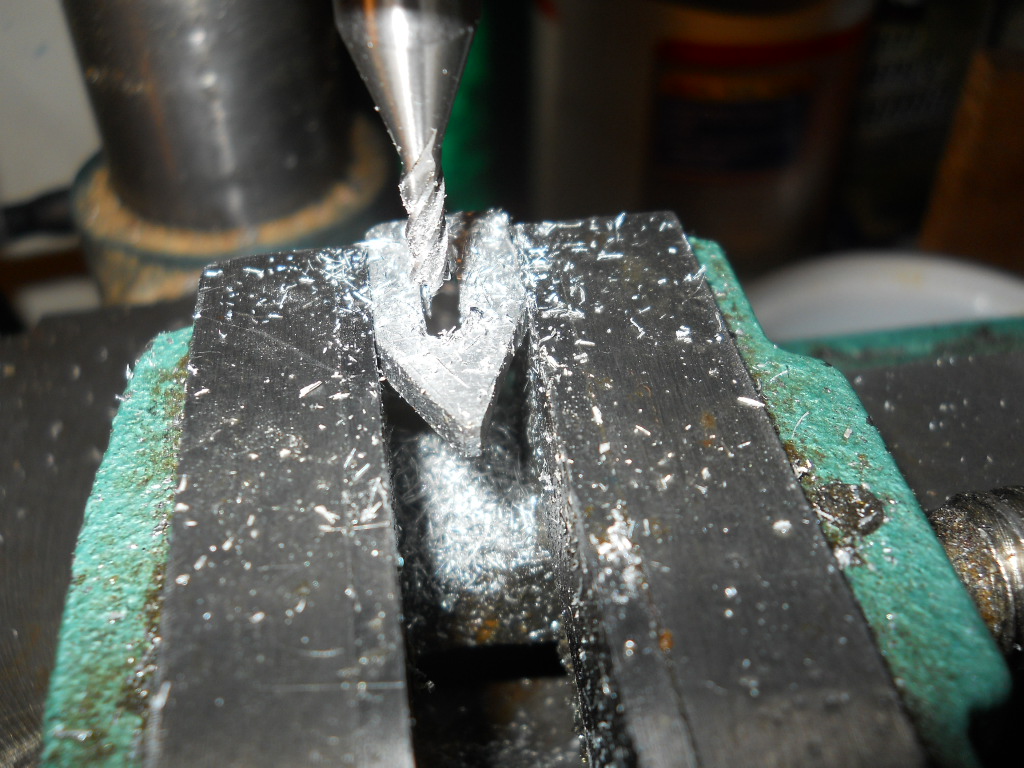 So I did something that the books do not advise you to do. I chucked a small endmill in the drill press and removed the webs by hand. Very difficult because my drill press does not have a quill lock. But I did it!  I do have the milling head for the Taig, but holding the work is 90% of milling and I cannot hold those fingers in the milling attachment at this time. At the end we had a quite respectable steady rest. 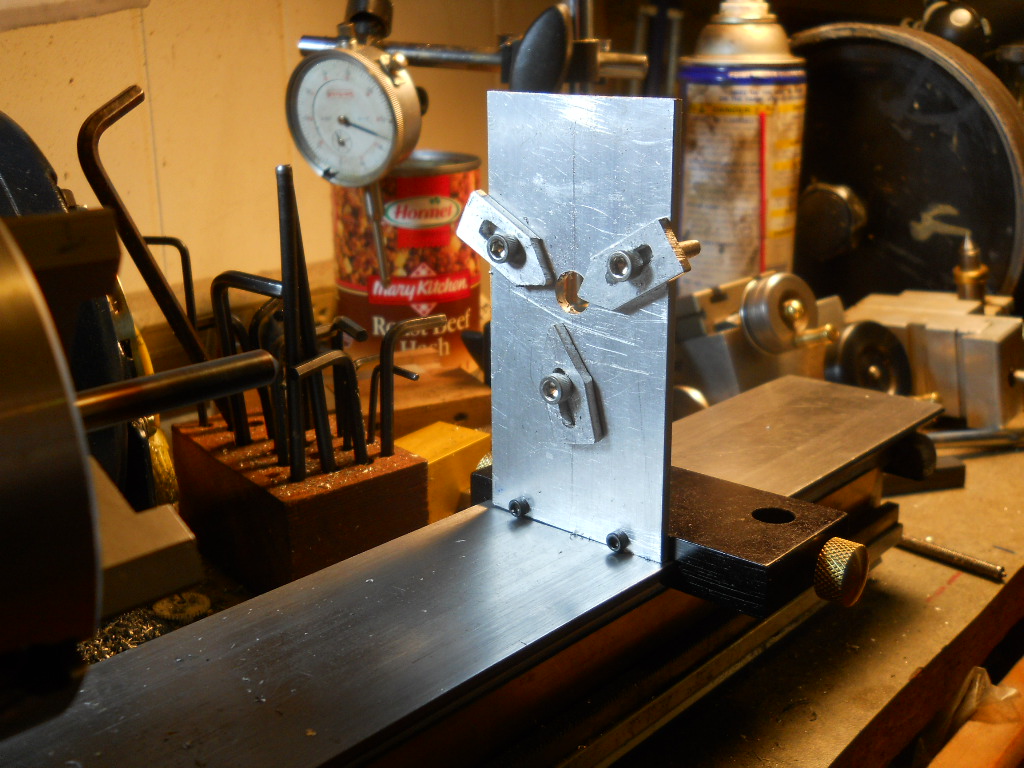 The slots on the fingers slide over 8-32 capscrews. Get your piece chucked, slide it through the hole in the upright, tighten up the fingers. I now have a new problem. I bought a bunch of fasteners in various sizes, mostly capscrews. Now where shall I store them? Ah, problem solved, problem created. But I have had lots of tapping practice. You can read all about tapping on the web, and in books, but there is no substitute for experience.

And of course this gadget had to have a name. Behold Steady Eddie. Long may he hold long whippy things.
Posted by JRC at 8:14 PM
Labels: steady rest, Taig