The last post (sorry for the delay)  showed the head mounted on the mill. This immediately showed a number of faults in the construction. One obvious one is that the slots in the head weren't long enough for the bigger gears in this clock. So take the head apart, and back to the mill. Make those slots longer. First to port... 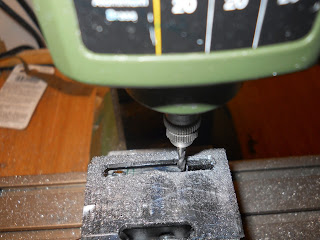 and then to starboard. 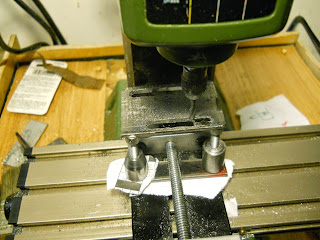 So now we have the slots to proper size. A far worse problem was that the bearing of the gear wobbled.  This was major surgery. I pressed the gear off the shaft. I turned it down to 5mm, because I just so happen to have an M5x0.80 tap and die. Thread the shaft in the lathe, make up a corresponding nut. Ideally it would be knurled, but I don't have knurling tool. So I cut longitudinal grooves in the nut, and it worked very well. You can see the nut in the picture below. Middle of the picture. If it is tightened down, the gear will not move. I suppose the worm slips on its shaft. Urk. But it sure squares up the gear. 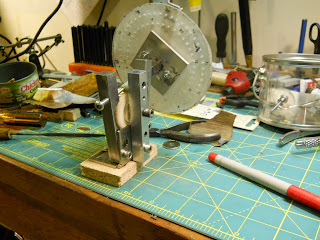 Another view from the business end of the device, my Proxxon spindle knock-off.
In practice the gear  is held on a fixture which I turned up. It has a 3.2 mm spindle, i.e 1/8" spindle. I had to turn up a similar fixture to hold  the fly cutter I propose to use. I think it may have made its appearance in a previous post. It fits the 3mm Proxxon collet. 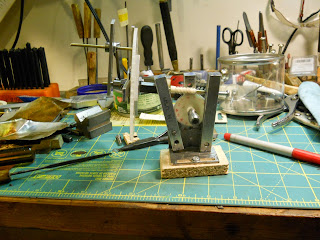 Well. I can't put this off any longer. Some previous experiments showed me that my fly-cutter was way off. But there are many variables. So let's try an official gear blank. I have tried power tools but they melt the plastic  I am using. So back to the Jeweler's saw. This is a piece of plastic about 3mm thick frome Home Depot at the stunning cost of $3. I doubt that anywhere in Alaska could I find the "compo brass" called out for this clock. 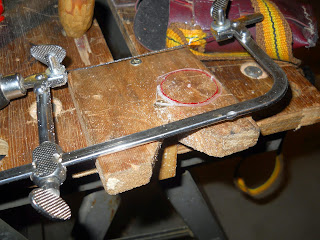 Having  roughed out the blanks with a saw, they are turned to the proper diameter on the lathe. 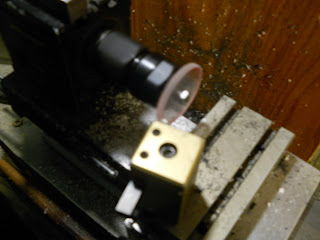 I am using my new ER-16 collet set, which I call the crocodiles, because they really, really grip. Goodbye, wimpy Taig collets. The new Taigs are bored out to accept ER-16 collets. OK, so we set this stuff up on the mill and proceed to cut gears.

Hah!  Not so simple a job as you might think. You have to (a) unlock the spindle (b) rotate the head the proper amount,  (c) lock everything down, (d) move the Y axis of the mill in 1.74 mm to cut the tooth. If you do not execute these steps in exactly that order, disaster is sure to follow. I am so glad I am using el cheapo plastic instead of brass! It is particularly important to remember when to lock and unlock the head.

My gears so far are a disaster. But we are now down to the profile of the fly-cutter. Today I made a gadget to help me judge that. But that's another post. Patience is the prime virtue of clockmaking. Just for fun I point out that the module of these gears is called out to be 0.6, which gives you a rough idea of the scale of this thing. Half a millimeter per tooth!  Acually pi times that. It is a small clock indeed. So small errors are hard to avoid.