The gear cutting business has gotten to me and I have laid it aside for a while, since the concentration required is a bit much. So I have started two new new projects. One is the gear cutter (more later I hope) and the other is Pantograph 0.1.

You will remember (or maybe not) the pantograph from another episode; the label is "pantograph."  It was a crude thing, inspired by Stefan Gotteswinter (look up his channel on YouTube). It was a sub-prototype. It was made of masonite, with expired Dremel tools as pivots. Call it v0.0. 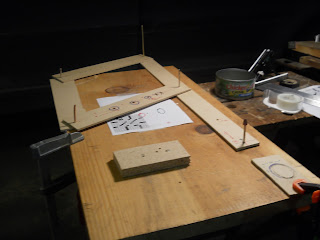 This thing will give you 2:1, 4.1 and one other ratio, something like 1:37:1.
I got that idea from Guy Lautard, "Machinist's Bedside Reader" which you can look up.

I used sharpies for 0.0. But all that would do is paper. I'd like to do metal.
So  it is time for a new version, 0.1.  For this I used steel arms; the pivots are bolts, and just to start I used nuts on the bolts. But there is a new requirement. It has to accept a Dremel tool.

A Dremel tool has a threaded nose that can be attached to other things.  Unfortunately this thread is M19x2, and it is hard to produce such a thread, although if you had a screwcutting lathe you could make your own tap. Fortunately Dremel makes a chainsaw sharpener kit (awful, I tried it) but the adapter works perfectly well, M19x2. So  here is the skeleton of V0.1: 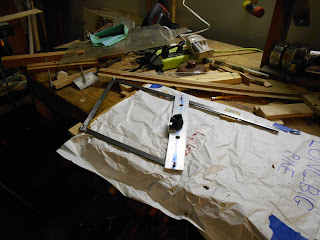 The arms are steel strap except the lower crosspiece which is aluminum. A piece of Al angle supports the chainsaw adapter, the thing on the middle of the aluminum bar. The pivots are now bolts and nuts, although that will change. Here  it is assembled, complete with workholder arrangement. (The crossbars and a couple of wedges). I am trying to engrave a piece of Ally scrap. 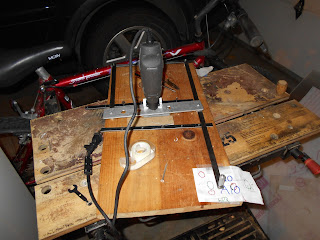 There are several problems with this setup. The workholding needs improvement. Maybe threaded inserts and toe clamps. The board is much too short, easily fixed. The worst problem is depth adjustment on the dremel. Too little depth and it won't cut at all. Too much and it digs in and won't cut either. I have slots cut in the angle support but that is cumbersome to adjust. I am pondering this one -- it is not trivial. A screw adjustment would be ideal and then I would have a cross between a mill and a pantograph. I could mill out odd shapes just like Stefan Gotteswinter does. We will see.