In the 1880s and up to the 1960s, a company called Emmert in Pennsylvania made something called a pattenmaker's vise. Patthernmakers were skilled woodworkers who made wooden patterns for sand-casting the many contraptions of the Great Industrial Era, anything from engine blocks to locomotives. They required vises that would hold workpieces in the most awkward of positions. Unfortunately patternmaking has given way to die-casting and we no longer make locomotives. so Emmert went out of business. Today an Emmert vise fetches $800 and up in the used-tool market. Too much for me.

Fortunately someone in Taiwan is making copies of the Emmert vise. They offered free shipping. So I got one.

Installing an Emmert vise requires major surgery to your workbench. Mine, double that, because the front is a 4x8 that I found derelict on a beach in Juneau. Below, I have made the major cutouts. All with hand tools. There is at least one YouTube movie that tells you how to do this, and the manufacturer's insturctions are amazingly clear. And, I may add, in English. 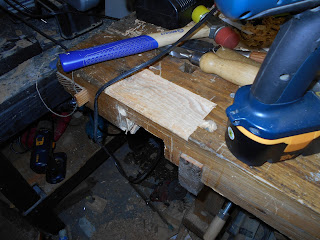 Then I had to remake the mounting hardware because the manufacturer thought I'd have at most a 3" depth. When that was done, we have Ueber-vise, whose name is of course Emmy, in position. 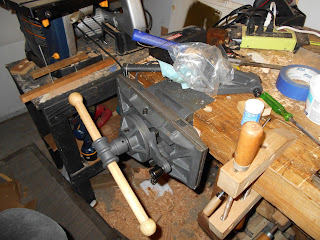 Emmy will swivel 360, tilt to any angle, and skew to accomodate tapered pieces. Further she has a metalworking vise underneath, (rotate 180 to get it), and in short is a supreme vise. I will not show the underneath beacuse it was an ordeal to install. But I am sure Emmy will be the star of many an upcoming post.

Fun to work with wood for a change.