I am getting old. I think I have lived longer than any other venezuelan Rivero. The price you pay is aches and pains. So I can no longer stand at benches for extended periods. Backache, bad stuff. So I decided to make a stool to sit in front of the woodworking bench. 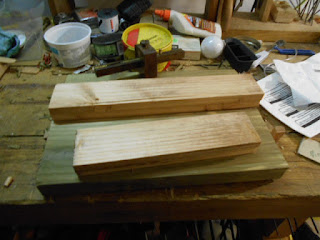 The first thing is the seat. I planed and edge-glued some scrap 2x6 together to make these, as shown above. At this point, I made a fateful decision. Obviously  if the legs go straight down, the stool will be unstable. Legs are splayed out for that reason. So I decided to splay outward in both directions. This is a double bevel. My bevel gauge is at Chalupy, so I had to pause to improvise one out of a hacksaw blade. This is by far the most complicated piece I have ever made, because of the double bevels.

The next job was to cut out dadoes for the skirts -- reinforcing pieces on the legs. I used my trusty rabbet plane for the purpose, as below. 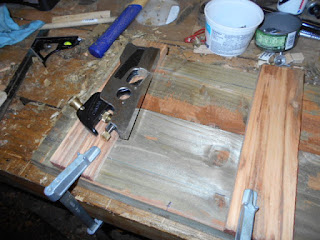 I figured that the skirts would fit into mortises cut into the legs. But wait, the legs are splayed! So I had to bevel the  bottom of the skirts so that they would splay outward, as well as cut a bevel on the edge. Then came the problem of cutting the double bevels as well as the mortises to accept the tenons. I had to make some holdit jigs as well, to get the angles right. 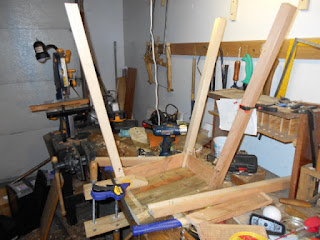 Above shows a view of progress to date. Three legs on, one to go. 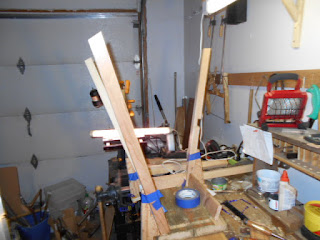 Above, you can see the thing from the short side. It looks cockeyed but it isn't really. The whole thing is not square to the bench. Looked on square it is OK. You can see the bevel jigs taped to the legs, and I am using constuction adhesive to stick on the legs. Later I will dowel through. By far the most complicated piece I have ever made. I am sure the power saw boys would have done the single bevel -- but I think they would have to build a special jig to do the double bevel. So far no power tools have been used in this build. More later.