About this time of year, male moose start shedding their horns, which they only sport during mating season. There are two big bulls in my neighborhood. I have named them Ricky and Racky. Racky has, of course, the larger rack. They are pals; they go about together. Unexpected behavior to me, but then, I am no moose expert. So I was out skiing a few days ago, and behold (and also lo!) what should I see by my feet but an antler, freshly dropped: 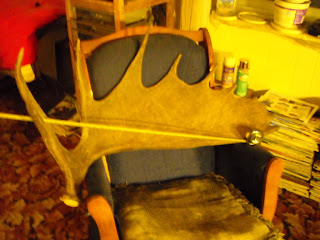 Couldn't tell, of course, whether it was Ricky or Racky. But it's big. The tape is pulled out to 95cm (about 34") -- a large rack indeed. I searched all over for ithe other one but couldn't find it. Amazing: in the snow, almost anything looks like a moose antler, but is usually a rotten log. Camouflage at work.

We had a moose convention in the yard today. I was out in the wilds, skiing, but my son recorded the jamboree. But that is another post.
Posted by JRC at 6:21 PM
Labels: antler, Moose, winter