The Chalupy Acres blog now sports a new logo, designed by my son, who is a graphic artist and musician. It is, of course, Darth Spader, Vader's little-known agricultural cousin. Observe his elegant Darthhartt overalls. (For those who are unfamiliar with the reference, Carhartt is a high-quality purveyor of work clothes, a byword in Alaska and elsewhere. I practically live in Carhartt's products.)

Darth Spader is, of course, a horticultural genius. One of Darth's creations is the Salad Trooper: 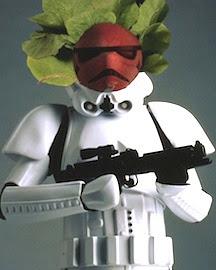 There is, of course, all kinds of symbology in this image (also by my son) . For two summers, I have grown radishes the size of a large potato. Give ol' spud a fright, they will. Hence, the head of the Salad trooper: a giant radish. This is all a part of Darth Spader's plans for agricultural domination, which will be revealed as we blog along.
Posted by JRC at 6:56 PM